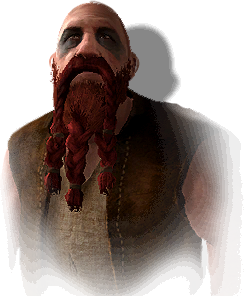 Thorak is a secondary character in The Witcher 2: Assassins of Kings. The dwarf trained as a runesmith under the famous Baltimore and then took over as Vergen's runesmith when his master disappeared.

The local rune master had been an important figure in the dwarven community of Vergen since time immemorial. At present that role was filled by Thorak, a dwarf who had taken up the legacy of his master, Baltimore, a few years earlier. Thorak ran his workshop impeccably, earning the respect and trust of his kin. He offered services of the highest quality and, like any ambitious artisan, was looking for a way to perfect his techniques and abilities.

Thorak proved to be a most helpful dwarf, and, after doing him a favor, Geralt could count on large discounts at his workshop.

If Geralt refuses to give Baltimore's notes to him:

Only after he died at Geralt's hand was it revealed that Thorak had been behind the disappearance of his master, Baltimore. Thus ends a story of envy that pushed even an honest dwarf to crime.