The Sentry is a quest in Chapter II which begins when, at Kalkstein's request, Geralt asks Vaska about the Mage's tower. She tells him what she knows and gives him the Tower tarot card, saying that she has no more need of it. This tarot card reveals how to defeat the golem which holds one of the keys to the tower.

After undertaking the Mysterious Tower quest, Geralt runs into some snags. Namely, he needs ten sephirot to open the tower and he can only find eight. It seems that the ninth sephira is inside a currently motionless stone golem in the Golem burial ground in the swamp. Using the tarot card that Vaska has given him and some help from Kalkstein, it becomes clear that the witcher must first wake the golem and then defeat it, in order to retrieve the sephira.

Waking the golem requires a bit of legwork, and it is not cheap either. Firstly, Geralt must have a lightning rod fashioned by either Malcolm Stein (who charges 50

), or by the Order armourer (who needs instructions and charges 70

). The choice of blacksmith will depend on which side the witcher supported in Force Recon. Then, once the rod is secured, there comes the question of summoning a storm on demand. Perhaps the druids can help? Yes they can, but it costs another 500

Once all the preparatory steps have been completed, there remains the fight with the Sentry, so our hero heads out to the Golem cemetery in the swamp. He finds the beast and jams the lightning rod into it. Since the druid has already summoned the storm, it does not take long for lightning to strike and wake the behemoth. It seems he is less than pleased at being roused.

Next comes a lot of running around. Geralt must touch each of the three stone posts for each "round" of the battle. The first two posts do not seem to do much except attract lightning to themselves. It is only touching the third post that can be tricky. Geralt must be outside the triangular area framed by the posts when he touches the third one, otherwise he will be struck too. The flip side of this is that the golem must be inside that same area or he is not struck.

It takes three successful strikes to kill the golem. At that point, it can be "skinned" and the Neh'tza sephira, plus its obsidian heart can be harvested. Voilà! 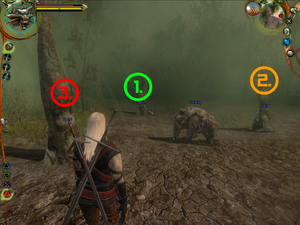 the activation sequence for the posts

Vaska revealed to me the story of the tower. To open it, I must consult the Tarot card that illustrates how to defeat the golem that is the tower's Sentry. I need to discuss this with Kalkstein.

Druids can control the forces of nature, so maybe they can summon a storm for me. I don't think they'll do it for free, though. I'll ask the druids to summon a storm.

Money for the Druids[edit | edit source]

Tip: This part and the next can be avoided by simply inserting the metal rod while it is raining, even just slightly, and the normal cutscene will play, saving you 500

The golem has awoken. I have to defeat it to enter the tower and find the Sephirah. I must defeat the golem.

I got another Sephirah, hidden inside the golem. It was not an easy task. I defeated the sentry.