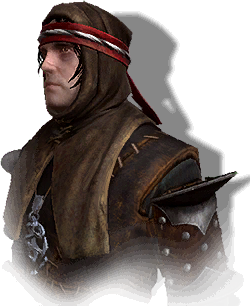 The witcher Serrit is one of the kingslayers and a secondary character in The Witcher 2: Assassins of Kings. Geralt "meets" him for the first time during an assassination attempt on King Henselt in the Kaedweni camp. Later, the witcher finds him, near death, in the Kingslayers' hideout. He belongs to the School of the Viper.

Sometimes a person's name sinks into memory and brings fear to one's heart at its first mention. Who was the mysterious Serrit? What goals drove him and what role would he play? Geralt had yet to learn all of this.

If Geralt chooses Roche's path during the end of Chapter I:

The vision of Auckes' memories lifted the veil of secrecy surrounding the other kingslayer. Serrit had also been acting on Letho's orders, and all three had been behind the deaths of Foltest and Demavend, as well as the attempt on Henselt. Serrit could certainly answer more questions, and Geralt knew where to find him.

Unfortunately, Síle found the assassin first. With his dying words, however, he confirmed de Tansarville's complicity in their conspiracy, as well as the fact that he knew Geralt. Serrit died before saying anything more, leaving the mystery unsolved.

If Geralt chooses Iorveth's path during the end of Chapter I:

Serrit was probably one of the witchers Roche had mentioned. He and Auckes trying to cover Letho's escape when Síle located their hideout. Though both died in the end, they completed the task, buying the last kingslayer time to flee.