During the Big Feet to Fill series of quests, Geralt can help the merchants and architects fend off bandits, to let them continue to build the statue. The Prophet Lebioda Statue will then be constructed in five stages.

During the reign of Duchess Caroberta, Toussaint was visited by a certain disciple of the Prophet Lebioda named Plegmund. His words and deeds – which included miracles – were so persuasive, soon nearly the entire duchy had converted to the new faith. They crowned this outburst of religiosity with the construction of a temple dedicated to the prophet, but that was not enough for Plegmund. He convinced the duchess to build a statue of Lebioda – the likes of which the world had never seen. 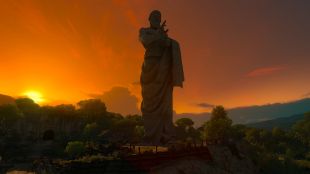 The statue at sunset