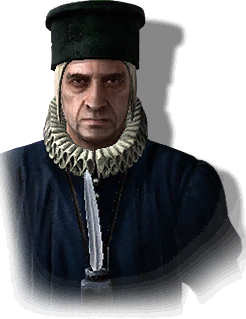 Louis Merse is a secondary character in The Witcher 2: Assassins of Kings. He seems to be very fond of forms, in particular, form WL-17 (for The Endrega Contract), form THX-114 (for The Nekker Contract), forms H-12 and AR-12 .

Merse is the royal burgomaster. He moved from Vizima due to some unspecified trouble and established himself in Flotsam thanks to his cousin Bernard Loredo's help. You can commonly find him in his home just off the main square, to the east of the scaffold (just behind Fioravanti's stall). Louis Merse takes care of the bureaucratic business in the town and of the Royal Mail service. Also he is responsible for the announcements offering rewards in exchange of killing monsters.

Later on, when Geralt finds Dmitri and kills him, you can find a report on him, revealing that Merse and Loredo are involved in the local fisstech traffic. Also they are covering for criminals like Dmitri. The safeconduct letter found on Dmitri also confirms this.

Louis Merse was a typical example of widespread bureaucratic nepotism. It was rumored that he had outright fled Vizima after bringing some unsavory troubles down upon his head. His cousin Loredo then granted him a comfortable posting in Flotsam, and Merse saw this as his second chance.