Lance-corporal Zyvik is a member of the Dun Banner, the quartermaster's service of king Henselt's army. His group stopped Geralt and his companions on the road to Ellander. He was also one of the combatants at the Battle of Brenna, along with his fellow Dun Banner members.

Other members of the Dun Banner[edit | edit source] 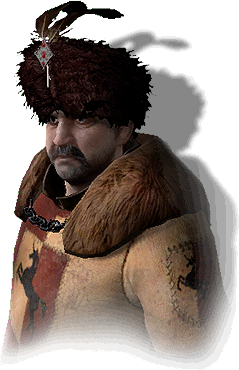 Zyvik is a secondary character in The Witcher 2: Assassins of Kings. He is a dice poker player and can be found at the Kaedweni camp during Chapter II. Depending on Geralt's choice of alliance, he can receive a camp tour from Zyvik and also talk with about the history of the Battle of Brenna and First Battle of Vergen, and on Iorveth's path he is one of the soldiers on patrol if Geralt chooses to sneak through the Kaedweni camp during the quest "Where is Triss Merigold?".

If Geralt followed Roche and decided to convince him to spare Henselt then Zyvik will be in Loc Muinne during Chapter III where Geralt can talk with him.

Though the generals and marshals are the ones to earn the laurels and honors from glorious battles, victorious campaigns and successful wars, the core of every army is made up of simple soldiers and non-commissioned officers. Lance-corporal Zyvik of the Dun Banner was the best example. Like any good soldier, he was no philosopher and did not question his superiors' orders, yet ruled his subordinates with an iron fist at the same time. His combat experience and years of practice had taught him a few key rules: One sleeps whenever possible and rises whenever awoken. Drinking on duty should be discreet and restrained, and a mouthful of booze must always be left for the superior officer. And finally, while on the march women should only be raped when nobody's watching. Add to that a sense of extreme pride in duties fulfilled, a trait so characteristic of a career soldier, and you get, my dear readers, a portrait of the model Kaedweni veteran.

The lance-corporal had taken part in the previous war with Aedirn, which had proven fatal for the Dun Banner. Isolated on the battlefield, the unit had been decimated and its standard fell into enemy hands. Though Zyvik might have considered himself lucky – he had been recuperating at a field hospital at the time, and was thus spared the same fate – the memories of those days, and of his fallen comrades-in-arms, were still fresh to him.