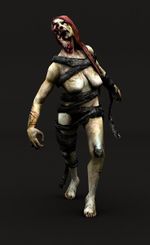 Zombies are animated bodies with no soul. In Sapkowski's books zombies are not specifically mentioned, only of the practice of necromancy, which is forbidden by the Brotherhood of Sorcerers. Necromancy is used for the purpose of extracting information from the (usually) recently deceased. The "interviewees" could be considered zombies. One example of the spell being used is when Visenna used it to briefly revive Manissa.

Some of the earlier artwork for the game shows that at least some female zombies were considered as monsters. From the look of the concept art, it is possible these evolved into the devourers found there now.

In the Arena mode, Geralt can face a Zombie Swordsman and a Zombie Arbalist.