Zdenek is the reigning world champion in fistfighting. He is undefeated. Well... no one has beaten him twice in a row... until Geralt, that is! He can be found in the southernmost refugee cave in the swamp cemetery. At least he has the decency to keep his fistfights to the privacy of his own chamber in the cave. 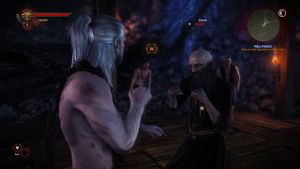 Zdenek in The Witcher 2

Zdenek also makes an appearance in The Witcher 2, though his appearance has changed considerably.

There is a character labelled as Zdenek who appears to be engaging in fistfights near The Nowhere in Novigrad but he cannot be interacted with. He later finds his death at the hands of thugs leaving a Certificate that Geralt can use to enter Whoreson Junior's arena impersonating Zdenek.