Woesong Bridge is a location in The Witcher 3: Wild Hunt. It is a double-span arch bridge built upon, arguably, a large ait, or river island, of the Ismena river. It is the main entrance to the village due to it being made of stone and a wooden outpost build at its middle. At its east lies Dune Vildenvert's farm, and the main village on the west. Just beside its signpost below the bridge is a chest that contains loot.

After the battle of White Orchard, Nilfgaardian soldiers now guard the bridge from the outpost. There are seven soldiers posted there, all of which use bow and arrows. The village's innkeeper's cousin Bram, the merchant whom Geralt and Vesemir saved from Ford, is just nearby to the west selling the goods he could gather from the cart he left after the griffin's attack. This was also where the drunk arsonist from the associated quest staggered over across.

So named because of a girl who once would stand on the bridge and sing, waiting for her beloved's return. 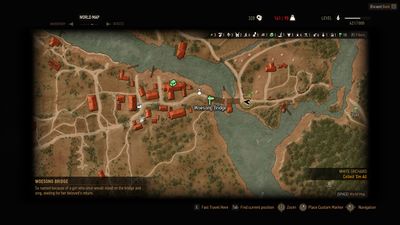