Note: This article concerns only the original computer game.

A Witcher wields two swords - but only one at a time, so other hand is free to cast Signs. Generally speaking, the silver blade is more effective against anything supernatural (werewolves, genies, vampires, ghosts, etc.) and the steel blade is more useful against mutants, humanoids and ordinary beasts.

There are nominally three different fighting styles in the The Witcher; for developmental purposes, however, there are effectively six, as Talent points must be applied separately for steel and silver applications.

Lambert can give Geralt a detailed description of each style during the Prologue; this conversation is the source of the quotes below.

"The techniques for fighting with a silver sword derive from traditional swordsmanship, yet with a few essential differences. No parries and ripostes, mainly steps, evasive moves, pirouettes, and other acrobatics." 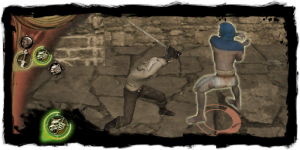 Lambert refers to this as the Temerian Devil.

"It was devised by Temerian landsknechts, simple men. It works best against heavy, armored opponents."

Hitting hard and heavy... of all the witcher fighting styles, this deals the most damage in a single blow to one opponent. The downside is its slowness; the enemy may be quick enough to slip in a debilitating blow of their own while the witcher is just preparing to strike. But against knights and necrophages, creatures with thick skin or tough armour, Strong Style cuts the fighting time to a much more bearable length. (Spoiler: Here is a list of strong opponents.) As dexterity improves, added attack efficiency renders Strong Style much more useful against swift opponents (see Fast style).

Use the Strong Style to defeat larger, armoured opponents:

"The elven swordsman and poet Nissail created it from his observations of wild cats, especially ocelots. The style favours speed and agility over strength of blows. The Fiery Dancer affords the opponent no time to strike. As Nissail wrote, 'The ideal Swordsman is a flame that can not be hurt and inflicts wounds each time it is touched.' This style holds sway among the elven aristocracy."

This style is a must when facing quick and agile opponents, like ghosts and vampires. However, it is relatively useful against heavier opponents like necrophages, too, because the blows landing in quick succession leave them precious little time to retaliate. This also means that the fights may become drawn out, the witcher 'bleeding' his opponent with nicks and shallow cuts. (Spoiler: Here is a list of fast opponents.)

Use the Fast Style to defeat agile opponents: 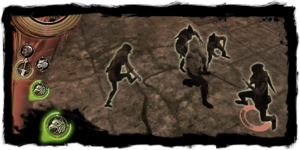 "Literally translated, it is the Nine Sun Swords. The swordsmen of Viroledo developed it as a method for tackling several opponents through complex slashing techniques. Masters of this style fight nine opponents simultaneously."

When surrounded by a multitude of creatures, this style shines. Its beautiful, circular moves make sure that every single one of the surrounding opponents gets hit (and with upgrades, grants a considerable chance of knocking them down). The Viroledan should be used with consideration; even though certain foes (like drowners) fall under the dancing blade like leaves, there are also monsters in the midst of which the Group Style is not recommended (such as exploding bloedzuigers and cemetaurs). When facing mixed groups, it is best to target the weakest enemy, where the chances of missing are the smallest. (Spoiler: Here is a discussion about group opponents.)

The Group Style is most effective against multiple weaker opponents: