Wights are monsters who are found in deserts and cemeteries in the warm season. They are only dangerous when confronted in the vicinity of their habitat. They "hibernate" between Saovine and Imbolc. They are mentioned in the same breath as giant scorpions, frighteners, scarletias, lamias and crab spiders.

In the Blood and Wine expansion[edit | edit source]

Wights can be found near cemeteries. The bestiary entry can be obtainedby reading "The Adventures of Spikey and a Wight Called Franconi".

They say the dead like quiet. I don’t know about the dead, but wights certainly do.
– Heinrich Von Grott

Though wights are ghastly and threatening in appearance, one should not approach them with sword drawn or attack them unprovoked. Left alone, they present no serious danger to anyone and are far more interested in mixing noxious brews in cauldrons than in fighting. This species mainly lives around ancient burial sites, though they have also been spotted near more recently-founded cemeteries and wherever mass graves can be found.

Wights spend the winter months in a state of lethargy very similar to human sleep. They live strictly solitary lives -- in fact, it is practically unheard of for these creatures to appear in groups. Yet when they fear their territory is threatened (and it is enough for one to step foot in a wight’s territory for it to feel threatened), wights transform into dangerous foes and even abandon their solitary ways to summon other monsters to their aid.

It is a certainty that if a wight finds itself in danger, it will immediately spew out an ectoplasmic solution which near instantaneously transforms into barghests. These beasts obey the wight and attack anyone it deems a foe. If one of them is killed, the wight tries to replace it at once.

The best strategy when fighting such a wight is to take out the monsters guarding it with the Axii sign before attacking the wight itself. Wights are resistant to poison, but vulnerable to silver. 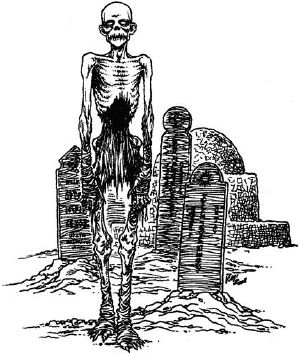 Undead monster resistant to steel, occurring in deserts and cemeteries. It looks roughly like a human but with dried flesh flaking from its bones, pointy teeth and sharp claws. One could say it looks like a mummy without the bandages. But which mummy can walk and has radiant, glowing eyes?

During an attack, wights sink into their prey like vampires, but instead of blood, they feed on the life essence. Intelligent beings who become victims of wights are not infrequently changed into wights themselves, though they remain under the control of their killer.

Wights are also repelled by sunlight, although it isn't harmful to them, they try to hide from it as quickly as possible.