The Werebbubbs (Polish: bobołak, pron. [bɔbɔwak] or [bɔbɔɫ̪ak]) are a humanoid race of short stature, with skin covered with hair. Some bobołaks were members of Fregenal's warband of "Koshchey's Men". Aside from a few mentions elsewhere, bobołaks appear only in one short story, "Droga, z której się nie wraca" ("A Road with No Return"), about Geralt's mother, Visenna, which takes place before Geralt's birth.

The bobołak traditions and legends were one source the mage Eltibald cited in favour of his theory.

Despite their name, werebbubbs are not therianthropes. Were- part stands for were, an archaic term for male human. In original Polish edition, they are called bobołaks, and again the -łak has the elder meaning, coming from the Proto-Slavic lakъ, meaning skin. Bobołak is just one of numerous variants of similarly called creatures in several folklores, including Slovakian bubulak, Polish bobok, bebok, babok and babuk, Greek baboulas, Mediterranean babau, English bogeyman or bugbear, German Butzemann, Egyptian al-Bu’bu and many others. Therefore bobołak can mean bogey-skinned or bogey-man.

In the graphic novels[edit | edit source]

In the graphic novels by Maciej Parowski and Bogusław Polch, aside from the comic "Droga bez powrotu", based on the short story in which they originally appeared, are seen contained in a reservation, together with vrans in the comic "Zdrada". A bobołak is also seen living among humans in Blaviken during the "Mniejsze zło" graphic novel (based on the short story "The Lesser Evil").

In the PnP RPG[edit | edit source] 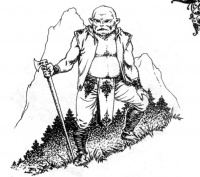 A bobołak in an illustration by Jarosław Musiał from the RPG

In the Wiedźmin: Gra Wyobraźni pen and paper role playing game, bobołaks are described in the bestiary in the main rulebook. They were going to be added as a playable race in an expansion based on the times of "Droga, z której się nie wraca". After the RPG line was cancelled, the description of vrans by Paweł Dembowski (Ausir) meant to have been published in that book was published online.

Bobołaks resemble humanoid beavers, they are as tall as dwarves and covered with fur. They have little eyes, spiky teeth and their fingers end with sharp claws. While their eyesight is weaker than that of the humans, they have excellent hearing. Bobołaks live mostly in the Amell Mountains, while some live in Mahakam as well. They can use the Common Speech, but among themselves they use their own language which is unpronouncable by other races. There were some failed attempts at assimilation with humans. The bobołaks guarded their mountainous homes from humans and tried to prevent them from mining there, to which the humans responded with by killing nearly all of the bobołaks.