Wargs do make an appearance in The Witcher 3 where they are larger, tougher versions of wolves. 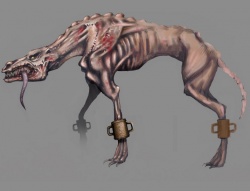 Early concept art for the Warg

Wargs are creatures which were part of the early design for the game, but which were either dropped or, more likely used as the basis for the armored hounds created by the Grand Master.