Wanted is a quest which follows the witcher as he pursues the Professor, trying to avenge Leo's untimely death at the hands of the cruel assassin.

The quest begins when Geralt finds an arrest warrant for the Professor on the Notice board outside the Outskirts Inn and ends with the Professor's death in the bowels of the Salamandra base. There is no guesswork in this quest; all advancements are a result of other (often previously-unrelated) quests.

In the phase about the reward offered for Salamander brooches, despite having already met Declan Leuvaarden in Chapter I, you will not be able to hand in the badges until you get the information from the 'Messenger' at the Hairy Bear Inn, which confirms that Leuvaarden is indeed the person paying for the badges. To get this information from the messenger, drink with him (he is a lightweight; you will only need five beers).

A Reward for Brooches[edit | edit source]

It seems a mysterious, wealthy man is offering a reward for Salamandra brooches. Clearly, the gang got on his bad side. Jethro told me I can find this individual's messenger every evening at the inn. I should talk to him. I should speak to the messenger if the man who rewards people for killing Salamanders. I'll meet him tonight at the Hairy Bear.

The Messenger or Working with Leuvaarden[edit | edit source] 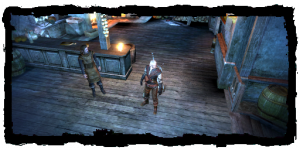