Vrans are a race of nearly extinct[2][4] humanoids[6][7] inhabiting the Continent. 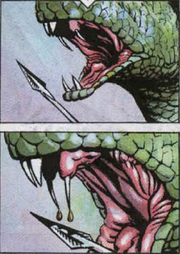 Typical vran is tall, bipedal, covered with scales[2][5] and hairless.[4] They are characterized by large ruby-red eyes covering about half of their face[6][4] which allow them infravision: an ability to see heat sources even in absolute darkness.[4] They have venomous fangs which can be used to make their weapon toxic.[2] A typical vran woman is distinguished from a man by voice timbre and being slightly less tall.[4]

Vran lifelength is similar to that of human, but their metabolism is so different to those of mammalian humanoids so that medics of other races have to study it whole years in order to operate on them.[4] 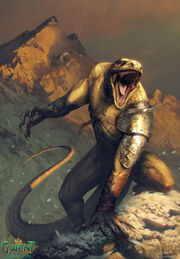 It appears that there is also an entirely separate sub-race called 'vran warriors'[3], more akin to reptilian ancestors due to smaller eyes and large tall, who are sometimes shown on vran monuments.[5]

Some Nordlings believe that vrans or at least a caste of them have an ability of polymorphism and imposter highly positioned human individuals like Emhyr var Emreis, but it isn't known for sure.[8]

The Vran mind is cool-headed, generally much less emotional than of other humanoids. Members of the race are startled by human passion for cruelty,[6] though it is alleged that they themselves lack significant compassion. Vrans do not possess any innate magical abilities,[4], but are able to master the craft equally as well as other races.

While most of vrans living within human society speak Common Speech fluently, they have their own language, resembling Russian[2] and Sumerian[5] from Earth. Many aphorisms contributed to vrans and translated to Latin are popular in academic society.[9] 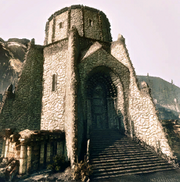 A sample of vran architecture

At peak of their civilization vrans created carefully planned cities of characteristic architecture style, with massive towers, walls and monumental amphitheatres. Doors and interiors were decorated with green or metallic pattern similar to scales. One example of such a city was modern-day Loc Muinne.

Similarly to dragons, vrans enjoyed treasures, warring for them and collecting them in vaults. Such vaults were protected by magical guardians who allowed to pass only incomers with conduct passes.[5]

Vrans do not worship any deities – they believe that only the life they are living right now matters. For this reason they venerate the life as the sanctity most high, because if there is nothing but life, taking it away from anyone and therefore making joy of it no longer possible is unthinkable.[10]

In ghettos and reservations[edit | edit source] 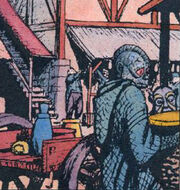 While living in human settlements vrans try to mind their business, in fear that sticking nose in someone else's affairs would bring them trouble – ranging from few racial slurs to a decapitation in hands of angry mob. Though hardly trustful, they often pack with werebbubbs proving that idea of bonds with other races isn't a concept unknown to them.

In non-human reservations vrans seem to participate in some kinds of ritual fights or games with werebbubbs.[2]

The dawn of vran presence on the Continent remains shrouded in mystery. According to some theories, they were one of the most ancient races inhabiting these lands, dating back thousands of years before humans settled into the area,[11] while others suggest they came during the Conjunction of the Spheres. They homelands were reportedly located east to the Blue Mountains.[4]

At some moment in history before the First Landing one of vran cities was settled by Aen Seidhe and named Loc Muinne. The reasons behind disappearance of its original inhabitants remained unknown for a long time. The elves claimed that the absence of vrans was caused by little ice age which forced they to abandon their seat. Humans, on the other hand, suspected purposeful genocide after finding dismembered vran sceletons in nearby caves. The true reason was discovered by mage aep Dearhenna during his studies on city chronicles in Black Academy. Vrans died because of a bacteria created by elves, as one of the culprits, named Goeveth, reported.[5]

Arrival of the humankind[edit | edit source] 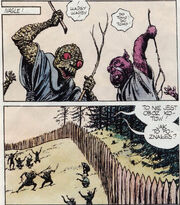 The vrans experienced difficult times after the humans came. Reptilian look, less sympathetic or trustworthy than dwarven or hobbitic one, became one of the major reasons of their persecution.[12] Priests of Kreve, indignant at their opinion on afterlife,[10] claimed them to be demons of hell.[4] As a result of several pogroms, skirmishes and regular military conflicts vran population decreased more and more. One of the last wars took place more than ten years before Geralt of Rivia was born, when human forces were led by voivode Grozim.[6] Because of it most of the vrans retreated beyond the Blue Mountains, while the remaining ones were enclosed in reservations with werebbubbs.[4]

Nine months before Geralt's birth[2] at least 8 vrans belonged to the band of Koshchey's Men who were terrorising the land around Klamat Pass. Some time after a couple of them were killed by Korin in Klucz[6], remaining ones avenged them by an ambush during which they shut the warrior with a poisoned arrow.[2]

At least some of vrans lived in human towns by the time of the Blaviken incident. A vran named Dziega was present at the marketplace during the slaughter.[2] 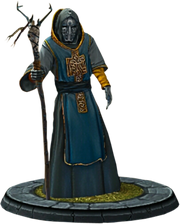