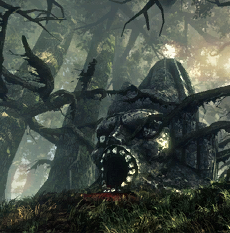 Veyopatis is a god mentioned in The Witcher 2: Assassins of Kings.

Veyopatis, a forgotten god of the Pontar Valley, is still worshiped in certain forest settlements, but the times of his greatness and popularity are long past. A few priestesses and witches make offerings to him, yet no common folk wish to take part in their rites. In the era of human colonization, Veyopatis was a guardian god, often associated with rivers from which humans drew benefit. He guarded people from the dangers of the forest. Poles bearing his likeness marked the border between areas that had been tamed and those that remained wild and dangerous. Veyopatis gave people fish, made sailing easier and his name was used to ward off beasts. Yet, he remained petulant and fierce. In these times, if those wandering through the woods come across stone idols with gaping jaws, they believe them to be the likenesses of fierce monsters rather than statues commemorating a once-loved deity.