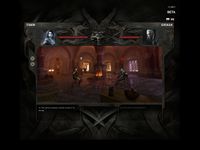 The "Versus" screen in The Witcher: Versus is the place you will surely visit most often, because the whole social life of the warrior is only carried on here in single duels – here they accept or reject challenges: duel results shall show accordingly.

Elements of the "Versus" Screen[edit | edit source]

On the right you will see info about your character: your chosen name (nick), class, experience points, level and other vital info.

In the window titled “events”, duels fought will be placed by your nick.

If you will wish to duel, there is a list of logged player in right bottom corner of screen; choose opponent from the area titled “arena” – and click “FIGHT!”. You will be queued for a duel to be held.

The Versus queue is refreshed often, however, you can refresh the window optionally each moment on your own, it refreshes by using the icon ” (over and to the side of the data window).

The screen will allow you to invite similarly as in the “Versus” screen. To write his e-mail address, click icon “send”. It invites friends in order to combat for glory with them and orens (gold)! This function is inaccessible during beta testing versions beta. 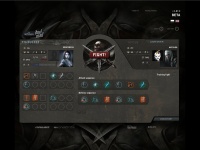 Try to combat with other beginning opponent players when beginning the game; battling wits with the strongest, put aside for later. Also in the future, when you will spread out your range of challengers (and you will), you will find that equal opponents will become the preferred challenge. Victory with considerably weaker opponents does come incrementally, but weakly. With equals you will earn more wins, but you will gain the biggest profits against higher level players than yourself, though it can turn out to be very difficult. It's best to think of tactics when searching for opponents also. If you are specialized in defense against charms, you are wise to duel with sorceresses, most probably, better than with other classes.

In order to start duelling, you must choose your opponent from the front FIGHTS page or on the RANKING page. You can see all of duel players present in the arena window, checking his combat status and wins by clicking his name in the lists. Single duels are listed by witcher, sorceress and then frighteners. This does not mean you have time in the course of a duel to reflect on battles played through – this could be momentary delay. So, the whole arrangement of battles are organized from the top to make this as quick as possible.

The planing panel eneables you to plan a fight, you wish to engage. You have an infinite amount of time to do it and you can resign from making a challenge (or refues a challenge if you were invited to duel) by clicking "Resign from battle" in the lower right corner of the screen.

The duel plainning panel contains all the information you need. On the right handside you have a summary of information about your opponent - his name, class, level, amount of experience, the number of fights both won and lost, gold amount and ranking number. Study this information to adjust your fight style to the enemy.

Planning goes on by configuring a sequence of blows, spells and abilities. From the ones available to you, you select the ones you wish to use. The higher level of the characters fighting, the longer the fight can last. Fights between beginners last up to 4 rounds (or less if one side dies), fights between advanced players can last up to even 6 rounds.

When planning the fight course, you have to take your fight potential into account, expressed in fury and elements, or however they translated them into English. Some abilities, especially the advanced ones, require battle energy (that is fury and elements). If you have 3 fury points at your disposal, you have to decide whether to use 3 weaker abilities each of which requiring 1 point, or one stronger ability which will eat all 3 points. Fury and element can be rise by buying equipment of learning abilities.

After having created a desired sequence (for both attack and defence) you can still withdraw by clicking "Withdraw from fight". It won't be possible after having clicked "Fight" button, which is used to ensue the challenge and memorising the sequence of blows.

After having challenged an enemy, you have to wait, til the enemy accepts your challenge and plans his own sequence of blows (this can last long, but waiting for a response from one player, doesn't unable you to duel with oher players). When you are both ready, the duel will commence. Information about it will appear on the "events" list on the "Fight" screen. Click on the icon of the fight, in order to see its course.

The course of the duel[edit | edit source]

The course of the duel is presented course on a special screen duel screen. Detailed informations of effects of the blows, skills and spells used by both sides are displayed under the battle animation.

The winner obtains experiences points and orens (gold) after the duel. The loser does not gain anything, and sometimes can even lose some experience (but will not lose any levels). Each of the combatants must also cover the costs of healing and repairing the broken equipment.