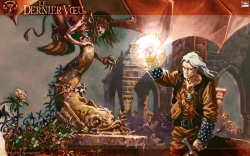 Vereena is a powerful bruxa who truly loves the cursed man Nivellen, though because of her nature this relationship is not beneficial for him. He initially believes she is a rusalka, and tells Geralt as much, but the next day Geralt discovers her true nature just before she attacks him. She almost kills Geralt but Nivellen shoves a "three-meter-long pole" through her chest, and moments later Geralt beheads her.

When in the form of a woman or "girl", she has petite features with "enormous", black, lustrous eyes, and thin, pale lips which cover "white spiky fangs". Her skin is so pale that her hands seem "transparent". Her shoulder-length, black hair is "dishevelled", "tangled", and "windblown". She wears a flowing, white dress that trails behind her. She moves over the ground so lightly as to barely touch it, and leaves no tracks. When she runs it is like a "white streak" and her dress never snags on anything or slows her down. As she glides toward Geralt during the final moments of their battle, she is "white and black, windblown, terrible".

When in the form of a bat, she is "enormous" and "black", with a "glossy" body. Her "long, narrow jaws" contain "rows of white, needle-like teeth". Her wings are "membranous". When charging Geralt, she flies as fast as an arrow. Her bat form likely has thick or hardened skin because a blow from Geralt's silver sword, that "should have sundered the beast in two", leaves on her woman-form's chest "a slash no longer than a little finger".

She is capable of speaking 'common' and what might be called 'the language of bruxae', though her method of communication seems to be a form of telepathy because Geralt feels her song and her hissing, and hears her words in his mind; her lips never move except to smile or to bare fangs. When attacking she is capable of shouting, a combination of audible sound and telepathic energy, with such force that it throws her target a considerable distance and leaves them stunned.

Vereena is mentioned during the quest Contract: Skellige's Most Wanted.

It is possible, but not likely, this particular bruxa is the one mentioned by a peasant woman in Murky Waters in Chapter IV of the game. A peasant woman tells of an acquaintance who fell in love with a supposed rusalka, who turned out to be a bruxa. However, a witcher is never mentioned as being affiliated with the event. The peasant woman then provides a Bruxa entry for the journal's bestiary.

Bruxae in the game do not completely fit the description given in the book, even allowing for variances in the genome: they wear no clothing, have long claws on their feet and hands, never metamorphose into bats for the purpose of attacking, and never run or charge.