Vara is a succubus and a main character in The Witcher: House of Glass. Formerly of Vengerberg, from which she was forced to leave, Vara is freckled and wears a red dress with a deep cleavage and straps falling on her arms. Her hair is partially braided, she has four braids going from atop her forehead to the back of her head where they join.

In The Witcher: House of Glass comic book[edit | edit source]

She meets Geralt soon after he and Jakob enter the cursed House of Glass (volume 2). Their first meeting is a little abrupt, surprising and somewhat violent, but soon after, they put away their swords and claws, introducing themselves. She explains to Geralt that she means no harm, that, above all else, she is bored to death and that, like her, he is also trapped in the house. At first, Geralt is rather cold and distrustful towards her, but his cautiousness slowly subsides as the two start drinking and talking as the succubus shares what she knows of this strange house. Vara tells him how she had to flee Vengerberg after the prude society discovered who she really was, how she went undercover and joined a caravan heading for Riedbrune, and how she got bored on the long journey and gave herself to the pleasures of not traveling alone, as she says: "in a variety of ways"; finally, how the merchants turned out to be thieves and how they had to run towards Caed Dhu from the armed men hired by the Vivaldi Bank, lastly ending in this mansion. She later shows Geralt to the cellar where her companions are supposed to be. The men are no longer human; they are "the cursed" who, unlike the succubus, are anything but friendly. After dispatching dozens of the living corpses, Geralt goes back up and is not happy, not one bit. He accuses Vara of trying to trick him, to lead him to his death. It is only thanks to Jakob's pleas, reason and common sense that Geralt stifles his rage and sheaths his sword, believing her words, that she had no idea about any of this and that not longer than two weeks ago they were all human. After temporarily parting ways with Jakob, Geralt and Vara take a walk, befriending each other, in an attempt to make sense of the enormous amount of stained glass present in the house while also talking about great many other things like love. 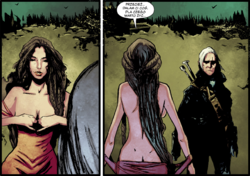 "But...I gave you something worth living for..."

The two eventually end up deciding on trying to leave. Their attempt is hindered by yet another battle - a Leshy appears in the forest with his pack of wolves. After this skirmish, the two are forced to return to the mansion. As they re-enter, they eventually discover an eerie feast - Jakob and his wife Marta are sitting at the table. Both are forced by the lady to sit and join the feast. The gracious hostess is acting very strange, disallowing anyone to get close to her or leave the table. Thus, the "guests" decide to ease the mood and start talking. At some point, Marta simply disappears and Jakob yet again parts ways with the witcher and succubus. Thanks to Vara, who stops Geralt, the two narrowly avoid another fight, this time with a Grave hag only to end up in... a bathtub.

At first, Geralt enjoys his few moments of relax alone, but is soon joined by Vara. They first discuss Marta's case, but eventually, the succubus gets bored of talking... Having spent there a few oh so joyful hours, they are separated as Geralt leaves hearing his mare, traditionally named Roach, being restless. Eventually, Geralt meets Marta again, discovers the truth behind the House of Glass and meets up with Vara, who admits she's been leading him to it. The riddle is solved and both Vara and Geralt are free to leave.

When offered to join him "until they are fed up with each other", Vara declines, saying she is also cursed. Geralt explains that she became afraid of what she would find outside, feeling safe only inside the house, that she is free to leave at any time and finally encourages her to find the strength not to be afraid. Their parting is shown as bitter-sweet and romantic, as the two have grown rather fond of each other gradually becoming lovers, comrades and friends.