Véa is one of two Zerrikanian warriors, as beautiful as they are deadly, who accompany Borch Three Jackdaws wherever he goes. Her companion in arms is Téa. Borch likes to refer to them as "his weapons". Their sword skills are unmatched. Of the two, Véa is taller than Téa. They appear in the short story "The Bounds of Reason" which is part of the Sword of Destiny collection. Her true name is not actually Vea, as she explains to Geralt, her real name is "Alvéaenerle", but these shortened forms are easier for Northerners to pronounce. 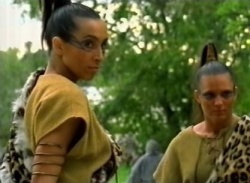 Véa was played by Julita Famulska in the film and TV series.

Alveaenerle is one of the Zerrikanians in the pen and paper game but there is no indication of whether or not it is Vea or some other Zerrikanian who shares that same name.