From Witcher Wiki
(Redirected from Urcheon of Erlenwald)
Jump to: navigation, search

Duny, also known as the Urcheon of Erlenwald (Polish: Jeż z Erlenwwaldu), was the husband of Pavetta and the father of Ciri. He also claimed to be the illegitimate son of king Akerspaark of Maecht.

He was featured in the short story "A Question of Price", in The Last Wish collection and mentioned in Time of Contempt and Baptism of Fire.

When Geralt first met Duny, he claimed to have been cursed since birth, never knowing the reason for it, nor who had cast the spell. From midnight to dawn, he was a normal man, but from dawn, he turned into a creature with a bristly muzzle which resembled something like a cross between a hedgehog and a boar. As the people in Maecht were very superstitious, his father wanted to hide him because spells and curses known to afflict the royal family could prove fatal for the dynasty. One of the king's knights took Duny away from the court and brought him up as his own, wandering the world until the knight died, leaving the young man alone in the world.

He had been told that a child-surprise could free him from the curse. One day he found King Roegner of Cintra wounded in a ravine and as a reward, King Roegner promised him "whatever he had left at home without knowing or expecting it", in effect creating the perfect conditions for this surprise child.

This was not entirely true. Duny had been cursed at the age of 13 by a mage hired by a usurper of the Nilfgaardian throne.

Duny's real father, Fergus var Emreis, had refused to cooperate with the plot and so was tortured but this did not break him, so the usurpers decided to get at the emperor through his son. This is where the curse came in. The wizard was told to transform Duny into a monster. To be clever, the wizard decided that the monster should resemble a hedgehog (hence the name "Urcheon") because the Elder Speech word for hedgehog was eimyr which is quite similar to Duny's real first name, "Emhyr". The word "Urcheon" in middle-english means Hedgehog.

Although the transformation of Duny was relatively successful, the tactic also failed to break his father so in frustration, the usurpers killed the emperor and released a cursed Duny into the wild to be hunted down like an animal, assuming he would be caught quickly.

Duny did elude his hunters and eventually regained his throne and his destiny. Once back in Nilfgaard he had the wizard who had cursed him captured and brought before him. He then decided to use logic similar to the wizard's for the choice of punishment. The wizard's name was "Braathens" and as luck would have it, that was quite similar to the Nilfgaardian term for "deep fried". 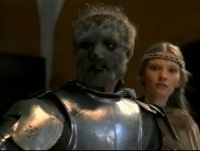 Although princess Pavetta was to be wed when she was fifteen years old, Duny visited her one year before, and they secretly fell in love. When the following year, the queen gave a party for Pavetta's birthday, he appeared at the feast and announced that from her birth, the princess had belonged to him, and that he had now come for her.

After Pavetta confirmed her wish to be with him, an uproar erupted. In the ensuing fight, Geralt saved Duny's life, and later, because of this Duny promised to give up his own child to be trained as a witcher.

When the fight was over, and the mood had calmed down, queen Calanthe gave in and agreed to their wedding. When the sun rose, and Duny did not transform into a beast, and so he knew that the curse had been lifted. After thanking Geralt, he and his future wife were surprised with the news that Pavetta was pregnant, and Duny was soon to be a father.

When the child was born, they named her Cirilla.

Geralt, with the help of Codringher and Fenn, discovered that none of Akerspaark's sons was named Duny. In The Lady of the Lake, the last part of the Witcher series, it was revealed that Duny and Emhyr var Emreis, the Imperator of Nilfgaard, were actually one and the same person.

While still in Cintra, though he maintained the illusion of being simply Duny, when the chance came, he tried to take Pavetta and Cirilla with him to Nilfgaard, where he was the rightful heir to the throne. He intended to do that by sailing across the Sedna Abyss, from which he was to be transported by the sorcerer Vilgefortz. However the plan didn't succeed, as Pavetta found out about it and left Ciri safely back on land. She and Duny argued and as a result, Pavetta fell overboard (possibly pushed over by Emhyr himself in his anger).

When Emhyr finally got back to Nilfgaard, he took back his legacy and became the emperor of Nilfgaard, beginning his conquest of the North. He tried to kidnap Ciri at all cost and twice ordered Cahir Mawr Dyffryn aep Ceallach to find her. But Cahir failed both times and the task was finally given to Stefan Skellen.

Despite the fact that Ciri was his daughter and only child, he wanted to marry and have a child with her, because as Ithline's prophecy said, Ciri's child would rule half the world, and the son of her son would rule the whole world.

Emhyr var Emreis was an intelligent and brilliant ruler. He picked his people well and crushed all plots against him. He was ruthless toward traitors and moved towards his goals with determination.

Duny was played by Dariusz Jakubowski.

According to IMDB, the actor Bart Edwards (known from the TV-Series Lykkeland (2018)) will play "Urcheon of Erlenwald".