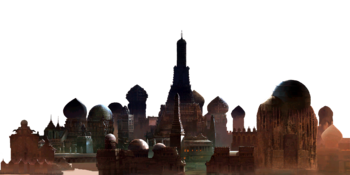 The underwater city lies somewhere in the depths of Lake Vizima, north of the Lakeside. In the opening sequence of Chapter IV, we are treated to the view of a regular phenomenon witnessed by the inhabitants of Murky Waters: a moonlit mirage of the city, risen above the waters. Before it sank beneath the waters of the lake, the city was inhabited by the ancestors of the people of Murky Waters. Only vodyanoi live there now, as it is told that the city was submerged by the gods as punishment because of the decadence of its citizenry.

Lately, there has been bloody conflict between the villagers and the underwater dwellers. It seems that the vodyanoi do not appreciate the human practice of "mining" the city and recovering "antiques" for sale.