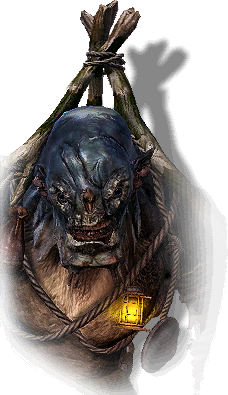 The Troll of Vergen is a secondary character in The Witcher 2: Assassins of Kings. He can be found in the troll lair in the ravines outside Vergen during Chapter II where is enjoying a bit of elf and onion soup.

He is also the husband of the She-troll of Vergen.

On Iorveth's path, in order to find Triss Merigold who has been kidnapped by the Kingslayer, Geralt must speak with the Troll of Vergen. The creature explains that he did find the sorceress after she fell from the sky. She was wounded and he tried to help her, but his jealous wife didn't appreciate the intruder, so she ran away leaving her husband. Geralt can choose to help the He-troll to find his woman and convince her to go back home. If he accepts, he finds the She-troll on a mountain in the southern area of Vergen, being attacked by Adam Pangratt and a group of his mercenaries. Geralt can decide to side with these men and kill the troll, or defend her and fight the mercenaries.

If Geralt decided to help both the trolls, at the end of Chapter II, the creatures will side Vergen defenders in the final battle with Henselt's army.

On Roche's path, Geralt and Vernon Roche meets the Troll of Vergen at the end of the Chapter, on the road for Vergen, after Geralt has dispatched the mist.

Note that there are 3 trolls on Iorveth's path that you need to leave be in order to get the Friend of Trolls achievement. If you take the Roche path, you will find 4 trolls, in addition to the three, there's another one hiding in a little cul de sac close to the brothel tent near the Kaedwani camp. Whether his murder is needed to get the Trollslayer achievement is not completely clear, but why take chances? Dispatch him to troll heaven and go on.

A troll kidnapping a beautiful sorceress? I could believe that. A troll abandoned by his wife for that reason? That's ballad material. Yet not many people would believe a ballad in which a troll asks a witcher for help.

If Geralt chooses to kill him during Chapter II - Where is Triss Merigold?:

Discussions between monsters and witchers almost always end the same way. This time was no exception and the troll departed this world.

If Geralt chooses to help him during Chapter II - Where is Triss Merigold?:

The grateful troll returned Triss' ribbon to Geralt and so ended this part of the story.

The final episode took place when both creatures arrived in Vergen to help defend it. The Kaedweni had occasion to learn that the phrase "the monstrosities of war" can be more than a figure of speech.