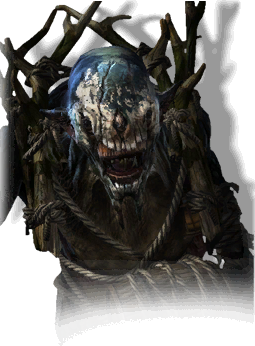 The Troll of Flotsam is secondary character in The Witcher 2: Assassins of Kings. He can be found near the ruined bridge in Flotsam forests.

The quest related to the troll is available with the DLC Troll Trouble.

Geralt is contracted to deal with the troll living underneath the bridge east of Flotsam. The troll typically keeps the bridge in good repair whilst charging for its use, but of late it has taken to vodka, allowing the bridge to fall into ruin whilst still aggressively demanding coin off travellers who approach it. The village elder of Lobinden asks that Geralt attempt to reason with the being, rather than simply kill it. When it is confronted underneath its bridge, the troll attacks Geralt in a drunken rage. After it is wounded, it pleads for mercy. Geralt has the option of killing it, or hearing it out.

If it is allowed to explain its behaviour, it says that it drinks in order to forget the memory of its mate, who disappeared recently. Geralt can offer to find out what happened to her in exchange for repair of the bridge. After asking around town Geralt finds the unfortunate she-troll's head afixed to Lobinden's tanner's wall. The tanner says he bought it off Dmitri the bandit, who is known to hang around the graveyard. If Geralt goes to the graveyard he finds Dmitri and his gang, dressing up the corpses of civilians as Scoia'tael and spies in order to claim large rewards from Loredo for them. Upon being asked about the she-troll, Dmitri and his men simply attack.

If Geralt kills Dmitri, then returns to the troll and explains what happened, the troll promises to repair the bridge and to stop drinking. If Geralt kills the troll, the bridge goes unrepaired. Either way, the village elder takes some convincing to pay Geralt for his efforts.

Like most of his kind, the troll living near Flotsam had built a stone bridge and demanded a toll from those crossing it. The folk of Lobinden quickly realized it was a preferable alternative to keeping the structure in good order themselves, so the troll's presence was not a problem for anyone. But, believe it or not, the troll took to drinking like the most degenerate hobo, thus proving that alcoholism is not unique to the more developed races.

A personal tragedy was behind the troll's drunkenness - the death of his wife. She had been killed by unknown assailants.

If Geralt chooses to kill the troll:

Geralt did not think long and, in accordance with his profession, cut the troll down, ending this story.

If Geralt chooses to help the troll:

Once the death of his beloved had been avenged, the troll pulled himself together, promising to rebuild the bridge and quit drinking.