Troll Trouble is the first DLC pack for The Witcher 2: Assassins of Kings.

Troll Contract
The authorities seek a brave soul to kill the degenerate troll lurking near the ruined bridge at the Aedernian border. The beast may be defeated by any means, just as long as it is defeated. The troll slayer will be generously rewarded (relevant taxes and levies have already been deducted) and receive the gratitude of the terrorized people of Flotsam.
Louis Merse, Town Chancellor

Geralt learns of the quest by reading the note on the Flotsam notice board. He then decides to go to the bridge. On the way, he finds a villager being attacked by nekkers. After rescuing the poor sod, he learns that the man had been sent by the merchants from the port to find out what was going on with the bridge and why, given that it is the only path out of the port inland. The villager also makes a point of mentioning that the bridge is in ruins and that the troll is demanding liquor to let anyone pass. Lastly, the man tells the witcher that he can learn more about the troll from Chorab, the village elder in Lobinden.

So it's off to Lobinden to see Chorab. The elder explains that without the troll, there would be no bridge at all, so it would be preferable if Geralt could simply get the troll to stop drinking and get back to work. The witcher is then faced with two choices:

If he decides to help the troll, he then has a chat with him. Please note, the initial conversation will always lead to combat - once down to approximately half health, the troll explains that he only started drinking when his mate was cruelly killed by some men while he was away minding the bridge. Now he's lonely and heartbroken and only vodka or vengeance can make him feel better. Geralt vows to find the men who killed his mate and return.

Geralt then decides to get more information about the troll from Síle and Zoltan, after which he has a look around Sendler's house, where he sees a she-troll's head mounted on the man's wall. When he asks him where he got it, Sendler tells him that it was Dmitri who killed the she-troll and quite audaciously at that. The witcher then tries to get Sendler to give him the stuffed troll head, but the man refuses. However, he does agree to play dice for it. Which in turn means having to complete the Poker Face: Flotsam quest in order to be eligible to play Sendler. (In order to get the she-troll's head, you first must beat Sendler and complete the Poker Face quest, then talk to him about the head and ask him for it, at which point he says he will play you in dice for it. Beat him a second time and you get the head as a reward.)

When Geralt pursues his line of questioning, Sendler admits that he doesn't actually know where Dmitri is, but that his henchmen drink at the inn and that they could no doubt tell the witcher where to find him. Geralt then goes off to the inn to find one of Dmitri's men.

He finds one without much effort, watching the fistfights in the basement. After a bit of intimidation, the man reveals that Dmitri is most likely in the graveyard. So then it's off to the graveyard.

Once there, Geralt finds not only Dmitri, but several more of his henchmen. A fight ensues, but as ever, Geralt is victorious. He has a quick look around, whereupon he finds a key, a letter of safe passage, a Report for Thaler and some other loot.

Geralt then returns to the troll, explaining that he has killed the men who killed his mate and returns to him, her head. The grateful troll then gives the witcher a diagram for Hunter's armor as a reward.

Geralt then returns to Lobinden to tell Chorab the good news and claim his reward. But there is one more surprise awaiting him, Chorab is unwilling to pay the promised amount, so Geralt can either live with that (not likely!) or "convince" the elder to pay the originally agreed amount (200

Geralt simply goes back to the troll, kills it and is done with it. He then returns to Flotsam and collects his reward from Louis Merse.

125 Experience gained for completing the quest. 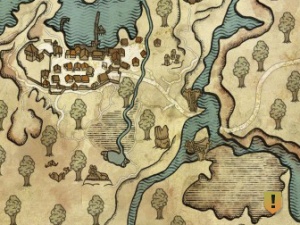 In practicing their trade, witchers abide by a code that clearly explains what they can and cannot do. Geralt claims he invented this code himself, to have an excuse for refusing unwanted jobs, but I think such a stratagem would be too complicated for him. Either way, Geralt noticed that Bernard Loredo had posted a bounty on the head of a troll living in the area. Because a troll is a sapient creature, it falls under the code as huntable only if evil. The curious witcher decided to check it out.

On a forest road he met a farmer from Lobinden and learned some things about the problems with the local Troll. The monster once worked on a bridge on the river, but took to drinking and started causing trouble. The peasant had intrigued Geralt - he beseeched him to talk with Chorab, the elder of Lobinden, before killing the troll.

Chorab had a peculiar request. Not only did he not want the monster to die, but he wanted the witcher to cure the troll's alcoholism! Things were starting to get interesting.

Geralt had a talk with the troll, man to man. It turned out that the monster fell into addiction after his wife had been killed. An event like that must have been the talk of Flotsam. Geralt decided to question his acquaintances.

The witcher learned that the female troll had been killed by one Dmitri, who then sold her head as a trophy to Sendler. It was that poacher who told Geralt that one of Dmitri's men hung around the inn. Geralt headed for Flotsam.

The ruffian spilled the beans and Geralt learned that Dmitri was up to something in the cemetery near Lobinden.

Geralt killed Dmitri and his bandits at the burial ground - the lucky bastards wouldn't have to go far now. The female troll was avenged, and the witcher went to see her husband.

The troll was as happy as befit his size, that is immensely. He traded alcoholism for workaholism and began repairing the bridge. Geralt knew Chorab would be pleased and he went to get his well earned reward.

Geralt picked his well earned reward from Chorab and left, content that he aided the local community, had a hand in the development of infrastructure, solved an alcohol problem and got paid on top of it all.