Trial of the Grasses

From Witcher Wiki
(Redirected from Trial of the grasses)
Jump to: navigation, search 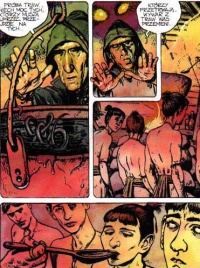 Trial of the grasses in the Zdrada graphic novel

The Trial of the grasses or herbs was an incredibly painful trial which young witcher apprentices were subjected to. It required the consumption of special alchemical ingredients known as "the grasses" and affected the nervous system. Reportedly, only four in ten survived the trial, but those who did gained lightning quick reflexes in return. The trial was performed in the witchers' laboratory at Kaer Morhen.