Tough Luck is one of the side quests in The Witcher 3: Wild Hunt. It is a 'Treasure Hunt' quest that can be stumbled upon while travelling through Velen.

Geralt came across an abandoned cart. A letter which he found nearby suggested it had been carrying valuable cargo. He decided to read the letter carefully, then take a good, hard look around.

Of course you can stay with us! What kind of question's that? Come, bring the whole family. War hasn't struck here yet, we've got plenty of food – my belly's even grown a bit in recent weeks. So if you take a bit of beer and bacon out of my mouth, you'll actually be doing me a favor.

We're already preparing a bed for you. You'll stay in the attic – it's comfortable there, long as you don't forget to duck when you go up the stairs.

Though Geralt felt sorry for the people to whom the wagon had once belonged, this did not stop him from taking the goods which they had left behind. You might find fault with this, but... Those were tough times, and the witcher was sorely in need of a coin. 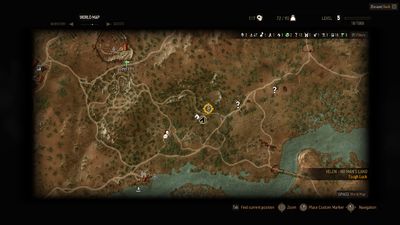