"The Witcher" (Polish: Wiedźmin, also translated as Hexer and The Spellmaker) is the introductory story in The Last Wish short story collection and Andrzej Sapkowski's first story about witcher Geralt of Rivia (first published in 1986 in the Fantastyka magazine). It follows the famous tale of Geralt's fight with a striga.

The story begins with Geralt entering Vizima. Shortly afterwards, he kills three men in a bar fight. He is escorted to Velerad, the elderly castellan of Vizima. When asked to explain himself, Geralt refers to the bounty notices posted at the crossroads near Vizima, asking for an experienced monster hunter. At this point Velerad tells Geralt of the Striga and her origin. Near the beginning of King Foltest's reign, he got his sister, Adda, pregnant. She and the baby died giving birth, both being buried in a double coffin. Seven years later, the daughter awoke and slaughtered the inhabitants of the palace. She had become a striga.

Geralt meets with Foltest, who warns him not to harm the striga, for a wizard had told him that if someone prevented the striga from returning to her coffin by the third crowing of the rooster, then she would be cured, turning into an ordinary little girl. Geralt asks to see a miller (a survivor of one of the striga's earlier attacks). The soldier that brings him to Geralt is Foltest, disguised. He gives Geralt leave to kill his daughter if he found that she was an incurable case.

Geralt spends the night at the old palace (Foltest having moved to a new palace, unplagued by the striga's attacks). During the early night, Lord Ostrit, a magnate, tries to bribe Geralt into running away, as he wishes the striga to survive. This would eventually horrify the inabitants of Vizima, who would more easily support Vizimir of Novigrad's rule. Geralt refuses, knocks Lord Ostrit out and ties him up. At midnight, he cuts Ostrit loose, using him as bait. He is soon found and killed by the striga.

Geralt fights with the striga, reluctant to use his silver sword. He ties the striga with a silver chain, which she breaks free off, despite silver being an antithesis to monsters of magic. She is eventually scared off when Geralt uses his sorcery to project the hate and malice in her own mind back at her. Geralt settles in for the night in the double coffin to wait for morning (not allowing the striga to sleep in her original coffin until the third crow of the rooster which would break the curse). In the morning, he sees an ordinary little girl who is lying on the floor. Leaning over her, he sees too late that her eyes are open. Using the last remainents of her talons, the striga slashes Geralt's throat. As he subdues the girl/striga, Geralt hears the third crowing of the rooster. Finally, he binds his neck, knowing he will faint.

The witcher wakes up, his neck bandaged, with Velerad (who was part of the group that had planned to just have the striga killed) admitting he was in the wrong. He assures Geralt that his silver sword, his three thousand oren reward and his possessions are safe. Geralt, soothed, falls asleep.

"The Witcher", being the first, is the most translated of Sapkowski's stories. There have been three translations of the story into English - by Agnieszka Fulińska, Michael Kandel and Danusia Stok.

Agnieszka Fulińska translated the story (under the title Hexer) for the Chosen by Fate anthology. The translation is mostly faithful to the original when it comes to proper names. One notable change is "strzyga" (striga in most other translations) being translated as "vampiress".

Michael Kandel translated the story (under the title "The Spellmaker") for the A Polish Book of Monsters anthology. He took much liberty with the proper names, changing:

Prior to the release of the anthology, Kandel's translation of the story was used by CD Projekt in promotional materials of their The Witcher computer game, with only the name "spellmaker" changed to "witcher", even though Kandel's versions of proper names were drastically different from the ones used in the game (which was generally more faithful to the Polish original).

Danusia Stok's translation in The Last Wish is generally faithful to the original when it comes to proper names, with only slight changes to help English readers with pronunciation of some of them. 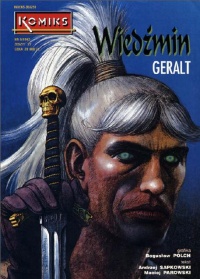 The short story has been adapted as a graphic novel entitled "Geralt", written by Andrzej Sapkowski and Maciej Parowski, with art by Bogusław Polch.

The short story has been adapted as part of episode 8 of The Hexer TV series, titled "Rozdroże" ("Crossroads").

The intro sequence in The Witcher game is based on Geralt's fight with the striga in Vizima. The game also hints that although cured, there are rumours of Foltest's daughter Adda still having a striga's bloodthirsty heart. Other characters introduced in this story, such as king Foltest and Velerad, also appear in the game.