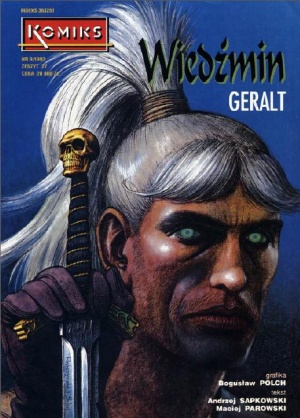 A 6-issue series of The Witcher (Polish: Wiedźmin) comic books based on Andrzej Sapkowski's short stories was published in Poland in the years 1993-1995 by Prószyński i S-ka, written by Maciej Parowski and illustrated by Bogusław Polch.

The original issues were (in the order of publication):

In 2001, the graphic novels were collected in 2 hardcover volumes, in the order of internal chronology:

A follow-up series covering the events of Sapkowski's novels was announced in 2005, and was to be again written by Maciej Parowski and illustrated originally by Przemysław Truściński (who also created concept art for The Witcher computer game), and later by Marek Oleksicki. This series was canceled in 2010, although several pages from both the Truściński and Oleksicki versions have been released online. 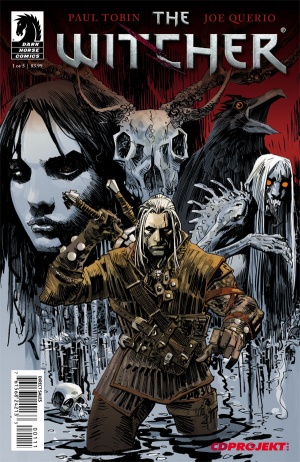 Since 2011, new Witcher comics are being released as part of CD Projekt's The Witcher franchise. The depiction of Geralt and other characters in these comics is based on The Witcher 2: Assassins of Kings and The Witcher 3: Wild Hunt video games and they are authorized by CD Projekt. They are not in any way related to the previous Polch/Parowski series.

A short comic book miniseries, not based on any of the novels or short stories but containing new adventures of Geralt, was released in 2011 by Egmont. It was written by Michał Gałek, illustrated by Arkadiusz Klimek and colorized by Łukasz Poller. Only one two-issue story was published:

While this was their only original Witcher comic, as of 2014 Egmont publishes the Dark Horse Comics series in Poland.

A new series of comic books, written by Paul Tobin and illustrated by Joe Querio and published by Dark Horse Comics, started in March 2014. While the first storyline, House of Glass, is an original story, the second one, Fox Children, is an adaptation of one of the chapters of Andrzej Sapkowski's Season of Storms novel.

A special comic issue was available only for preorders of The Witcher 3: Wild Hunt - Collector's Edition in some regions. Judging from what the title says it contains a story based on the Killing Monsters trailer.

With April 8th 2016 CD Projekt RED has started a new comics mini series on their Facebook site with comic strips, written by CDPR team and drawn by Polapaz-IsisT.