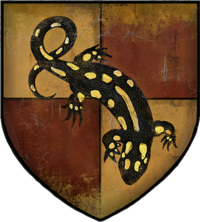 The Silver Salamander Inn is an abandoned site overrun by bandits, until Geralt comes along.

When folk query this inn’s Nilfgaardian owner, a certain Calixte Moire, whence came the establishment’s name, the man always refers them to the Second Battle of Sodden. His Father, Antoine, showed particular courage during this battle, as evidenced by the Medal of the Silver Salamander which was awarded to him by the emperor himself in honor of his valor and dedication on the field of battle.