The Rotfiend Contract is one of three possible contract quests in Chapter II The Witcher 2: Assassins of Kings. It is only available if Geralt chooses Roche's path.

Rotfiend Contract
It is hereby announced that the good King Henselt, Lord of Kaedwen, offers a bounty for the extermination of rotfiends in the vicinity of the camp. The monsters must be eliminated once and for all, by any method. The brave soul that rids us of the rotfiends will be rewarded by Proximo, and his feat duly recorded in the chronicles of Kaedwen. 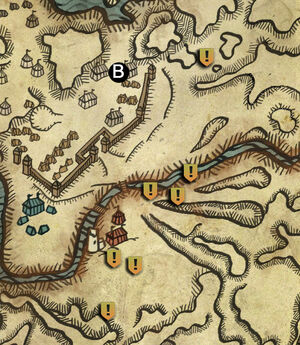 locations of the corpses

This quest can be acquired from either from the notice board next to the canteen, or from Proximo, who is standing near a fire with some soldiers, near the fighter's arena. Ask him if there are jobs.

If you speak with Sambor outside the camp (he is next to the small bright red tent) you can buy the rotfiend book from him.

There are a total of nine corpses to burn, spread out in three locations. The first location is near the camp followers' encampment, the second is past the tower, and the third is to the north of the camp within the ravines (on the way to the Visionary).

Note: On the map, the large B is the location of the notice board and the shields are the locations of the corpses.

Henselt's army was pestered by rotfiends. The creatures were dangerous in their own right, but also carried diseases which would spread among the army like gossip through a dormitory for high society girls. The witcher took up the task of slaying the monsters and went about it like a true professional - he killed individual specimens, and also read books about rotfiends.

He quickly discovered that rotfiends are necrophages. Their diet is made up of corpses, or even just bones from which they sucked marrow. Burning all the carcasses was the only way to rid the area of the monsters.

Geralt burned the unburied corpses around the camp, thus cutting off the rotfiends' food supply. Content with himself, he went to see Proximo about his reward.

Proximo was happy with the witcher's service. Geralt took a pouch full of orens and went to take care of other business.