The Nekker Contract is one of two contract quests in Chapter I of The Witcher 2: Assassins of Kings. You can receive this quest by reading the Notice board in front of Flotsam inn, in Chapter I.

Nekker Contract
It is hereby announced that Commandant Bernard Loredo has posted a generous bounty for the extermination of the nekkers in the vicinity of the trading post. These monsters must be eliminated once and for all. The one to accept this job – and successfully complete it – will be rewarded with a bulging pouch of orens, and a priest will be paid to conduct prayers in our hero's name for twenty eight days.
Louis Merse, Town Chancellor 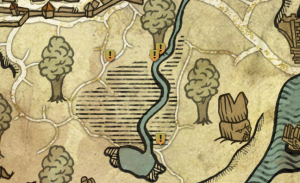 Locations of the nekker nests

The contract to initiate this quest can be found on the Notice board outside the inn in Flotsam. The quest will inform you to find additional information about the beasts. That information can be obtained from the book Nekkers in the Mist that can be bought from Einar Gausel, or simply by killing certain number of nekkers. The nekkers themselves can be found in the forest, mostly in the swampy areas in the middle area. To complete the contract you will need to either purchase or make four grapeshot bombs and place them in your quickslots to use to destroy the tunnels with. Purchase the grapeshot bomb formula from Cedric.

Three of the nests are relatively close together, with the last being further south, northeast of the waterfall. Use the witcher's medallion to highlight them on the ground if you have trouble identifying them. To destroy them, simply move close and click

when prompted (NOTE: you cannot do this in combat and throwing bombs by pressing

, it will not destroy the nests) but do not remain near the tunnel when the bomb explodes or Geralt will take damage. It should also be noted that when you get near the tunnels, many nekkers will surface and you'll have to fight them in order to plant the bomb if you missed the small window before they arrived.

When you have cleaned the area and detroyed all the four nests, come back to Louis Merse to get 150

as a reward. If you also have completed The Endrega Contract, you will get a schematic to craft a Witcher's superb silver sword.

In spite of events, Geralt had not forgotten his profession. Witchering was the prime source of income, so when he learned that the Flotsam authorities had posted a bounty for exterminating nekkers, he accepted the job immediately. Before he began, he decided to learn more about the vicious creatures. He began looking for books about nekkers and searching for the creatures to observe their behavior.

Geralt learned that the local nekkers used a system of underground tunnels to move about. He thought that if he could find a way to destroy all of the entrances to these tunnels, most of the nekkers would be buried alive. Those remaining would likely then scatter, making it all the easier to exterminate them.

The witcher acted on his idea. The nekkers were thus buried in their underground dens, and Geralt went to see Louis Merse about his well earned reward.

Louis Merse nodded approvingly, filled in the THX-114 form and, having paid the witcher, wished him much luck. Then our hero left, thinking about what to spend his hard earned orens on.