"The Last Wish" is a short story included in The Last Wish collection. This story describes the circumstances of Geralt and Yennefer's first meeting.

One morning, while trying to catch fish for breakfast, Dandelion and Geralt instead haul up an ancient, sealed amphora. Dandelion, in a fit of glee, and ignoring Geralt's explicit warnings, opens the vase and a large cloud of red mist escapes—a genie (or djinn, more accurately)! Geralt dives for cover, but Dandelion feels he knows exactly what is happening and hold his ground, beginning to recite his list of three wishes. The genie doesn't fulfill even the first one of the bard's wishes (that his rival die of apoplexy), opting instead to strangle the bard.

Geralt rushes to his friend's rescue, and after seemingly a fruitless fight, decides to use some folk knowledge he had always considered to be nonsense. The witcher seizes the ampora seal which has fallen to the ground and shouts out an exorcism. The genie releases the bard and disappears across the river, but Dandelion is far from well. It seems his throat and larynx have been seriously affected and he needs help desperately.

After a day's ride, they arrive at the gates of Rinde, but are told that no one may pass through the gates between dusk and dawn without a letter of safe conduct from the king or proof of nobility. The guard offers them the gatehouse until morning, pointing out that Dandelion will fare better there than out of doors. Having no other option, the witcher agrees.

Waiting for the dawn to break, Geralt makes the acquaintance of two elves Chireadan and his cousin, Errdil and a half-elf knight, Vratimir. They inform him that there heavy duties and penalties for spellcasting within the city, and the mages are boycotting Rinde in return. There is one though, who continues to work her magic within the city limits and generally flouts the law: the sorceress Yennefer of Vengerberg, residing in the sanctuary provided by the Novigradian merchant-ambassabor, Beau Berrant.

When dawn breaks, Geralt enters the city to find the sorceress. Arriving at Beau Berrant's home, he is greeted by Cerberus, the doorman of sorts. After a fruitless discussion, Geralt decides that perhaps gold might open the door and knocks the oaf unconscious with his money purse. Once inside he drags Cerberus into an open room where one of the female staff is happily snoring away. The witcher then proceeds to the basement where he meets a very inebriated Berrant. The ambassador, it seems, is on a mission to get apple juice for his guest and asks Geralt for help. Geralt fetches the juice only to find Beau unconscious.

Noticing a staircase nearby, the witcher climbs up to what turns out to be Yennefer's bedchamber. The sorceress is far from awake. Despite their rather explosive start, Yennefer is willing to help Geralt and Dandelion, right after a bath. While Yennefer takes a bath, Geralt is amazed by her beauty, but also realizes that it is probably a spell, as most girls who become sorceresses are ugly or malformed by nature. He puts these thoughts aside, and decides to just enjoy her beauty, as they talk over Dandelion's condition. Once dressed, Yennefer opens a portal and the two set out for the tavern where Dandelion is laid up.

Back at Errdil's inn, Chireadan and Geralt sit downstairs waiting to hear about the bard's condition and chatting a little about Yennefer over a cup of herb tea. Chireadan tells Geralt in no uncertain terms that Yennefer, while beautiful, is not to be trusted.

After a while, Yennefer summons Geralt upstairs; Dandelion is happily, safely asleep, and there remains only the question of price to be discussed. Geralt first wants to take Dandelion to safety, and offers a price to guarantee his return. Yennefer wants her price right away though, and reveals that she has in fact trapped Geralt in the room. The witcher is completely paralyzed. After a rather fruitless argument, Geralt passes out. When he regains consciousness, he find that he is sharing the cell with some 'honest thieves', an innocent old man and Chireadan.

The elf tells Geralt the reason for their presence there: under the influence of Yennefer's spell, Geralt went rampaging through the town, punishing anyone who had ever insulted Yennefer. The local apothecary Laurelnose was actually publicly spanked by the witcher for his "crimes". As the two men reflect on their situation, their musings are rudely interrupted by the entrance of three guards. One of them starts taunting Geralt while his friends hold the witcher still, then proceeds to repeatedly punch the witcher in the stomach. Seeking to get out with the least injuries possible, Geralt tries to goad the man into rendering him unconsicous. He expresses the wish that the man simply burst, and to everyone's surprise, the guard does so.

Later, the witcher and the elf are brought before the town's mayor, Neville and the priest Krepp. The mayor is not happy with the situation, but before he can reach a verdict, Dandelion suddenly drops into the room from a magical portal which suddenly appears on the wall. The bard shouts with a fully restored voice that he wishes everyone present to believe that the witcher is innocent. He was instructed to do this by Yennefer, who sent him through this portal, and wanted to clear Geralt's slate.

Dandelion has hardly had time to explain himself, when a roaring commotion is heard outside, loud enough to be heard over the current thunderstorm. Rushing to the window, the group sees that Yennefer has lured the genie to the town, and is trying to capture it to gain its amazing powers. The genie is much stronger then expected though, and despite Yennefer's spells binding it to Errdil's inn, the genie is trashing the town.

Geralt ushers everyone else to safety, and asks Krepp to stabilize the trace of the portal Dandelion just fell through. After a few protests, the priest obliges and the portal reappears. Geralt jumps through, intent on saving the sorceress. Yennefer doesn't want to be saved though, she isn't finished trapping her genie and resists Geralt's help, even opening a portal to get rid of him. While he falls into the portal however, the Witcher grabs Yennefer, and the sorceress is dragged into the portal with him. When they exit the portal, Yennefer immediately shakes off Geralt and goes back through the portal, but Geralt follows her.

Outside, the people gathered are watching in terror as the genie continues to rampage through the city. After a scuffle between Yennefer and Geralt, with waning powers, the sorceress traps Geralt. The witcher tries to talk some sense into her head, but she won't listen to him.

Then, Geralt realises something. It was not Dandelion, but it was him that did the first wish, and thus the genie is still awaiting Geralt's third wish. Because the genie still has to fullfill his master's wish, he is not yet freed, and is thus not able to be captured by Yennefer. While rethinking his possible last wish, he also realizes what Yennefer looked like before she became a sorceress; she was a hunchback. Then, he decided upon his last wish.

The next moment, the genie tears free, the inn collapses and silence descends. Under the rubble, Yennefer finds herself in Geralt's arms, close and intimate. Just moments later, Yennefer and Geralt make love in the remains of what was the beginning of a stormy relationship. 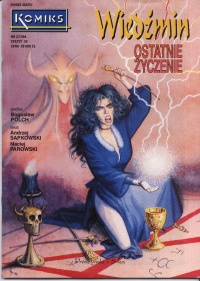 The short story has been adapted as a graphic novel entitled "Ostatnie życzenie", written by Andrzej Sapkowski and Maciej Parowski, with art by Bogusław Polch.