The Kayran one of the main quests in Chapter I of The Witcher 2: Assassins of Kings.

After you talk to Síle, you join up with her in the forest near where you investigated the shipwreck with Triss. She will mention something about keeping the Kayran in place while you go down to kill it.

The Kayran has six tentacles, the two on each side have growths in the middle that you need to attack. Before you can attack these tentacles, you have to go to the left or right of the Kayran and cast Yrden sign on the ground. When the Kayran moves its tentacle to strike, roll or move out of the way. The tentacle will be trapped by the sign, during which you can strike the swollen-growth part of the tentacle. Upon accumulating enough damage, a mini cutscene would be played to show the tentacle being cut off. After you have cut one of the tentacles off the Kayran will be enraged so just move to the side and avoid the main tentalces. also try to avoid its main tentacle because it can kill you in one blow!.

After you cut off three of the tentacles, there will be a sequence of 3 separate QTEs (if you are on Easy difficulty, or on Normal/Hard difficulty with "difficult QTE" turned off, you would only be prompted with the second QTE)

Upon successful completion of the QTEs, a cutscene depicting the bridge collapsing on top of the Kayran will trigger. You can choose to hide behind a chunk of bridge that fell off or run directly toward the ramp on the left edge.

While running up the ramp, keep to the left as the right side leads to a dead end. Attempting to cast Quen on top of the ramp is dangerous as you might get hit by the tentacles/rocks, it is safer to just continue running to the top.

Once you reach the top of the ramp, a cutscene will play and you will have defeated the Kayran. 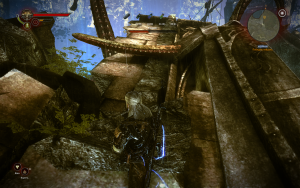 What about the monstrosity of Flotsam? Well, Geralt heard that the beast had attacked a man on the pier. Driven by professional curiosity, he went to investigate...

Indeed, it was as the people had said - the unlucky victim lay on the pier. A riled crowd surrounded him and was commenting on the events. Among the onlookers stood the sorceress Síle de Tansarville. The witcher and the sorceress exchanged but a few words before she asked Geralt for help in hunting down the dangerous beast. First, they needed to identify the species. An elf named Cedric was said to be the most knowledgeable about the local wildlife.

Cedric lived in Lobinden, a village nestled up against Flotsam's Walls. Humans paid him to keep the forest beasts away from their huts, so he spent most of his time on tree-top platforms gazing into the forest thicket.

The witcher found the elf and questioned him about the monster. He learned that a poisonous mucus covered the beast, so that a single touch of its tentacle could fell a towering man. Geralt decided he needed an antidote, but to make this, he would first need a sample of the mucus. So he embarked on an expedition to the monster's lair, and Triss joined him.

In the kayran's lair, Geralt learned that the monster's mucus was highly toxic. Triss gave our hero the formula for a potion that would render him immune to the beast's terrible venom, but he needed a herb known as ostmurk to make the draught. I've continued the story of the herb in another section, dear reader. Here you will learn how the hunt for the kayran progressed.

After speaking with Síle, Geralt was ready to fight the kayran. armed with a sword and knowledge, he set out to slay the monster.

You should have seen the battle! The bridge's arches crumbled like houses of cards and the beast's blood mingled with its poisonous mucus. Finally, the witcher, with much effort, won the day - the beast was dead, and our hero could pick up the reward he had rightly earned.