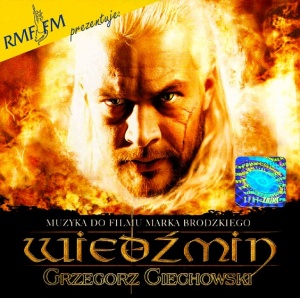 The Hexer (Wiedźmin, The Witcher) movie and TV series soundtrack was composed by Grzegorz Ciechowski and released on October 3, 2001. Songs were sung by Alicja DeRota Węgorzewska and Zbigniew Zamachowski, who portrayed the bard Dandelion in the movie. The promotional song "Nie pokonasz miłości" (You Won't Conquer Love) was sung by Robert Gawliński. Unlike the movie and TV series, the music was well received by fans of Andrzej Sapkowski's books.