The Dead Have no Defense

The Dead Have no Defense is one of the quests available in The Witcher 3: Wild Hunt.

Unwary visitors to cemeteries just might find their stay prolonged indefinitely. The dead don't always like having their rest disturbed, while necrophages never like having their meals interrupted. One time, the witcher happened across just such a group of underprepared, or possibly simply unlucky, cemetery-goers. One of them had been carrying notes of some kind. Driven by curiosity and, I must surmise, a lack of anything better to do at that precise moment, Geralt set about reading the sloppily-written document...

Last week the three of us grabbed this traveler. Looked like the kind of cowardly fuck starts shitting his breeches at the first sight of you. But seems looks can be deceiving. Bastard started waving a sword, cut my ear off and sliced Olaf's arse so deep he's got an extra crack, except the new one's horizontal. Then he smacked Ivar in the forehead with the hilt. Poor sod's still dizzy.

We snuffed him in the end, of course – every fellow's doomed when he's outnumbered. But it turned out he had a handful of coins in his pouch, a copper ring on his finger – and that's it. We lost out on that robbery – paid more to the herbalist for patching up than we took from that whoreson. So afterwards Olaf said, "Why the devil risk our necks waiting around for travelers, when gold's literally sitting right under our feet – buried with the dead?" A corpse can't defend itself, so the risk of injury's nil. No need to wait around all day till someone walks by – there's already a couple dozen someone's [sic] waiting for us, lying in their graves, each one marked out like veg at a grocer's.

So I gave it a good think and concluded Olaf's talking sense. So starting tomorrow we're going to stay off the roads and do our looting in the graveyard instead.

It turned out robbing corpses was not the gold mine Olaf and his crew had imagined. The witcher, though, made a tidy profit off their "labors". 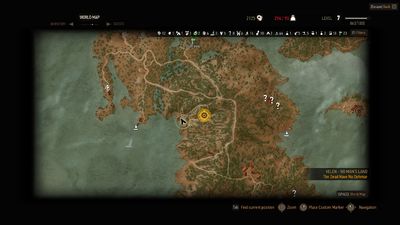 There is a bug where the corpse to loot the quest items Marauder's notes and Common key does not appear.