The Blood Curse is a quest in The Witcher 2: Assassins of Kings.

When you visit the site there will be numerous things to look at but you should inspect the wheel to get the nail and the altar to get the note and the square coin.

If you keep running along the wooden pickets you will come across a few Rotfiends and three corpses for "The Rotfiend Contract". After you finish killing them and lighting the bodies hug the left wall until you see a path to a cottage. The harpies here should have infinite spawn, so you should just run past them and towards the house, where you will see the visionary. There you have the option of bribing him or joining his cult. The latter should be better as you get to kill an arachas and a few endregas for XP. To do the ritual he tells you to do, you must go to the area and meditate till it's between midnight and dusk. Then, drink the potion and you will proceed to see a funny cutscene.

You can essentially keep running straight until you see a blue mist. Use your medallion and an orb will appear leading you out of the battlefield. Avoid fighting and you can get out quickly. Eventually there will be a fork in the road, where you will take the left and a cutscene will trigger and you will reach Vergen if you continue on that same path.

Saskia will tell you that Skalen Burdon has the spearhead. To get it you only need to defeat him in a game of dice poker. You have the option of playing him again to win additional items. 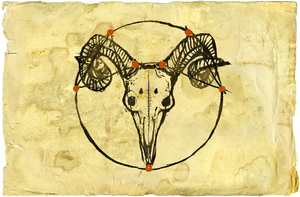 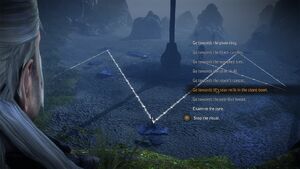 Geralt directing the king through the path 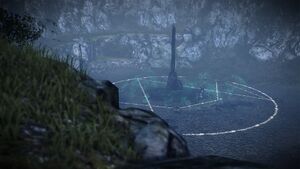 The king inside the fully drawn circle

To lift the king's curse talk to Henselt then proceed to the site of Sabrina Glevissig's execution. Once there, Henselt will direct you to the spot from which he watched the execution. This site gives Geralt a good view of the execution site. In the next scene you'll need to direct Henselt as he walks the path illustrated on the image of the goat skull found in Dethmold's grimoire. The path he takes should be a traversal of the path without visiting the same vertex twice.

Ritual Order (the most elegant traversal)

Given that Henselt begins while standing in the pixie ring (mushrooms), he can also use the reverse of the above traversal.

After the rune has been drawn. Ask the king to scribe a circle around the whole rune, then tell him to stay inside the protective circle where you will be able to cast Igni using LMB to light the pyre in the center.

After a cutscene, you will have to kill a number of wraiths (probably 9 or so) after which the king will stab Sabrina's ghost with spear and trigger another cutscene. Note that running out of the ring while fighting the wraiths will cause your vitality to drop. The king invites you to his tent for a drink. When you arrive the king informs you about Temeria's inheritance problem with no direct heir to the throne except Foltest's sister's child. Assassins arrive to kill the king during dialogue, so be ready for another battle before meeting the King.

At that time, King Henselt suffered from an embarrassing affliction. Namely, he had been cursed by the Sorceress Sabrina Glevessig, whom he had executed for making a grave error in her magical practice. Witcher are experts on curses and can generally figure out how to lift them, but even they need pointers sometimes. Geralt headed for the site of the stake at which Sabrina has been burned. To lift the curse, he needed to learn exactly how the execution played out. Then, he would need to recreate it using the very items that had been used during that event.

After examining the tracks around Sabrina's execution site, the witcher had many questions and preciously few answers. Geralt decided that the soldiers keeping vigil at the circle could be a good source of information and began to question them.

Geralt followed the trail like a hound from royal kennels, and pursued the solution. When it turned out that the inspired, a man fascinated with the sorceress who met an ill fate, lives in the hills east of the camp, the witcher felt he'll surely learn something the king couldn't tell him there.

At Sabrina's pyre, Geralt indeed met the two soldiers Zyvik had mentioned - badly terrified, but both in one piece. More importantly, however, he examined clues and and discovered that the sorceress' remains were in high demand. According to the soldiers, a relic vendor peddling his wares by the canteen had been gathering bits from around the stake. That's right - the deceased sorceress had already become the object of worship.

Having heard about the Visionary and the relic vendor, Geralt had to decide whom to head to first.

Asked about saint Sabrina, the vendor grumbled something about it being the Visionary obsession. Thus, willing or not, Geralt had to head for the hermit's house.

The witcher finally managed to fulfill all of the Visionary demands. The Hermit agreed to talk about Sabrina Glevessig, her martyrdom and the events following her execution.

It turned out that the merciful soldier present at the sorceress' execution had prematurely ended the tortured soul's suffering. That event changed him: he deserted and started preaching Glevessig's sanctity. The spear he had uses to pierce Sabrina's side, as a powerful item, was quintessential. The witcher had to acquire it and, since he'd found a great source of information about the sorceress' cult, he decided to drink his fill from the wellspring of knowledge.

According to the Visionary, the relic vendor now owned the spear. Geralt headed for the canteen, where the man peddled his wares.

The relic vendor danced around the subject like a true master. As a businessman, he did not want his secret to go for free.

And nothing. The spear was in the hands of Iorveth, thus in Vergen, the town beyond the ghastly mist. The way through the battlefield was mortally perilous, even for a witcher. However a man who had already proven his ability to protect others from the curses evil aura made camp at king's side. It was the sorcerer Dethmold.

Henselt's advisor told Geralt how to get through the ghastly battlefield. Equipped with an amulet to repel wraiths and a white flag for playing envoy, Geralt went through the mist towards Vergen. He hoped to find Iorveth, since according to the relic vendor the Scoia'tael leader was the current owner of Yahon's spear.

The Witcher took Zoltan along the way, and the two of them entered the wraiths' mists, the very heart of the ghosts' battle. If not for Dethmold's gift, who knows, maybe they would have stayed there forever? Surrounded by wraiths, they trudged toward Vergen, following the amulet's direction.

Geralt and Zoltan finally got through the wraiths' mist. And fell straight out of the frying pan into the fire, since they ran into a group of Scoia'tael near Vergen. The meeting would have ended tragically, however Zoltan managed to talk sense into the hot-headed elves. Geralt learned that the town gates are closed. The guards from the night watch were deciding who would enter Vergen.

As it turned out, Yarpen Zigrin, Geralt's and Zoltan's old friend, kept the watch at night together with Skalen Burdon, nephew to Vergen's alderman. The witcher learned that Saskia was currently holding counsel with important individuals, and there was no way to talk to her. Yet it turned out that Geralt could obtain the Dun Banner's standard and the Kaedweni general's sword without exchanging one word with the Dragonslayer. The head of Yahon's spear, however, seemed beyond his reach for now, as it was in Iorveth's possession. Nevertheless, the witcher suspected it would end up in his hands one way or another. Zoltan promised to obtain the sword himself, and agreed to meet Geralt in the secret, underground passage leading to Vergen. Geralt could either go there immediately to wait for the dwarf, or set off in in search of the other items.

Geralt had many adventures on the Vergen side of the mist: above ground and below, sad and happy. He saw a vast piece of the country and enjoyed himself thoroughly. It was a true shame that the gates of Vergen remained closed to him and he could not visit the famed Turquoise Knickers brothel that so many bards have immortalized in song. Still, the trip was fruitful - our hero acquired all the items he had been seeking, including the head of Yahon's spear. Now, he needed to take the spearhead to King Henselt.

On his way back to King Henselt, Geralt had to pass once more through the spectral mist. The wraiths surrounded him, but the amulet was working and pointed the witcher in the right direction. Yet the way through the battlefield was not easy.

The Witcher had to cross the mist once more - and definitely not the final time. He again survived crossing the cursed battlefield in one piece. When he caught his second wind, he made sure he hadn't lost the spearhead and hurried to meet the King.

The king was happy, for he already had enough of Sabrina while she was alive, and his hatred of the sorceress grew even further after her violent death. He wanted to immediately efface every trail of her by performing an exorcism in the place of her execution. However Geralt was a professional and said that before anything could be done, he had to examine the place carefully.

A witcher is never reckless while doing his job. Before the exorcism would begin, Geralt scoured the area left to right. Because he still had doubts, he decided to take a look at the site from a hill.

Geralt faced quite a task - he needed to guide Henselt as the king drew the magic runes illustrated in Dethmold's grimoire around Sabrina's Circle. Henselt had no notion of magic and rituals. He was also impatient and clumsy, whereas the task required focus and precision. The witcher would have preferred to chase Sabrina's ghost away with a rag than bother with Henselt and runes, but he always liked to finish what he started.

When he saw everything clearly, he told Henselt to trace runes with the magical powder. When the king did so, the witcher lit them with the Igni Sign.

The ritual fulfilled its purpose. All present could see the ghost of Sabrina Glevissig. Henselt could begin the exorcism. To send the hateful ghost to the beyond, he had to stab it with the relic spear, thus symbolically redressing the sorceresses suffering.

Henselt performed the exorcism, while Geralt skillfully repelled the wraiths drawn to the execution site like moths to a flame. It worked - once more Sabrina left this vale of tears in grand fashion, though this time her curse had no power. While listening to the raging ghost, however, the witcher made out her prophetic words. And because one cannot merely dismiss a specter's curse, our hero decided this information could be useful to his investigation into the plot against Henselt.

The exorcism ended favorably for both the monarch and the witcher. Geralt's achievement is the stuff of songs today. Henselt was pleased, of course, but do not think for a minute that he threw himself at the witcher with kisses, scratching him with his thick beard. Kaedwen's lord and master was not prone to effusive displays of gratitude. Still, he did invite Geralt to his tent for a private audience.