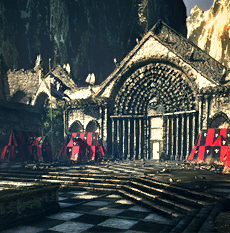 Temerian Quarter is a location in Loc Muinne in The Witcher 2: Assassins of Kings. Geralt only gets full access to it if he follows Roche's path. It is also there that he has his final meeting with Letho.

During the summit of mages and monarchs, the camp of the Temerian delegation led by John Natalis extended over an entire district of Loc Muinne. Plenty of diplomats milled around the camp, but soldiers were present in far greater numbers.