In the Witcher novels, teleporters called "portals" are used to travel not only from place to place, but also through time for a certain few who possess the appropriate genetic make-up. 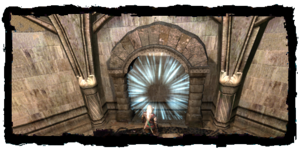 Teleporters are an incredibly handy way to get around when moving between the swamp, Trade and Temple Quarters. No more spending endless hours trudging from one place to another, this is instant travel. It also economizes on all the fares you would otherwise be giving the ferryman.

There seems to be a theme in the game about teleporters, perhaps relating to incidents mentioned in the books. Several people, Kalkstein and Leuvaarden in particular, relate stories of unfortunate people who used teleporters less than successfully. These individuals often arriving at their destinations in pieces. The actual functioning of the teleporters are not really explored further, but in the cut scenes, Geralt does look like he is being "sucked in" when he uses them.

Triss' mirror also functions as a telecommunicator (as is shown in the opening cut scene of Chapter III), very versatile... and I suppose Triss herself, on occasion, could be considered a teleporter. She does teleport our hero at least twice during the game: first to the Salamandra base and then away from danger. There is a suggestion of a third time, otherwise how would Triss have gotten an unconscious Geralt out of the swamp and into her bedroom in the Trade Quarter anyway?