There seems to be some possible romance going on between Geralt and her. When you first talk to her after the attack of the Kayran when you meet up at her lodging above the Tavern in Flotsam, you can successfully persuade "flag" her, and after killing the Kayran there seems to be another "romance flag". In short, just wondering, was/is this being tracking somewhere on the wiki? - AEon2001 (talk) 16:54, 25 October 2013 (UTC)

There is an entry in the Journal: 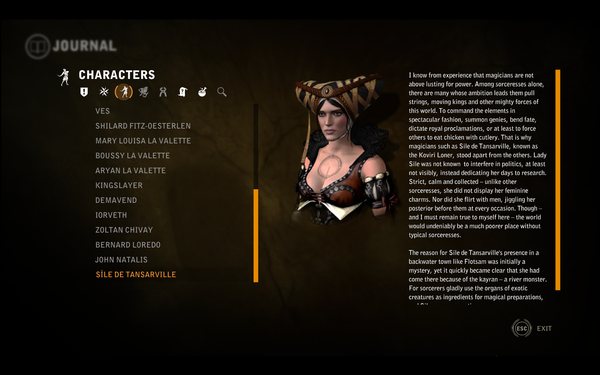 It's the same character, so no point in having a separate article. She is named Sheala in the books and in the Polish version of the game. As for renaming the article or not, that's up to debate. Anyway, I created a redirect, so if you type "Sìle de Tansarville" in search or link to it, it will go to this page too. Ausir(talk) <staff/> 00:16, May 20, 2011 (UTC)

It should at least be noted at the top acknowledging the reason for the alternate spelling, (I would suggest having both names in the heading). At the moment it just looks like the author got it wrong or was sloppy, since many gamers would not have read the book.

It would be better in the main title so it's obvious at first glance. Overall I think the reason for the difference is poor translation on the developers part. I see many other differing names for objects, or the wrong words used in the journal. This leads me to believe they used different translators, or that English wasn't the translators first language.