I seem to remember reaching the druid's grove in EE and getting a cinematic about "places of power". I'm not sure whether this results in an extra entry for the journal or not (or even experience points). When I eventually get back to the game, I'll check the journal to confirm, but just calling it to your attention now in case someone else has experienced same. Chuckles guide 13:16, 2 May 2009 (UTC)

Update: The visit definately didn't trigger a quest update (checked quest history), but I don't know if it added anything to the journal's glossary / locations or if it gave experience. It still may be worth mentioning in this page though... Chuckles guide 00:34, 6 May 2009 (UTC)

I'd definately used them before. Gramps will definately invoke a cinematic if you approach the druid's grove, but the journal is left unaffected (probably because I already had a glossary entry for places of power). I cannot be sure whether or not I got experience for the encounter because I've already deleted such old savegames. Chuckles guide 00:21, 8 May 2009 (UTC)

I do remember making this quest unstartable by simply visiting Gramps' house (possibly the discovery of meat in the hut was a trigger) in the swamp without taking him on his pilgrimage. This sort of information may be useful to mention. Chuckles guide 01:05, 6 May 2009 (UTC) 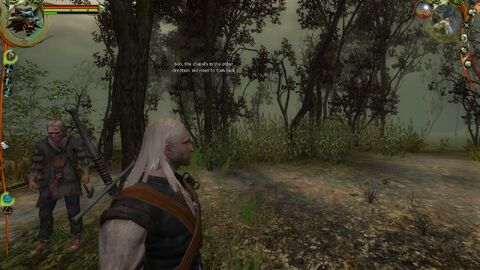 The developers intended to implement: "Grandpa talking to Geralt when they are going to the statue of Melitele through swamps and they go the wrong way." The message reads (either/or):

But it just floats in the middle of my screen, not above Gramps, and the voice acting isn't heard either. The message appears over and over, I feel spammed. 3ICE (talk) 12:58, August 3, 2012 (UTC)