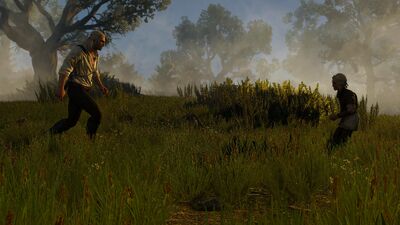 "Something More" (Polish: "Coś więcej") is the last short story in the Sword of Destiny collection by Andrzej Sapkowski. It takes place after the fall of Cintra, as Geralt is on the road towards Cintra hoping to find Ciri.

The story begins with a merchant, Yurga, alone on a crumbling bridge trying to fix the wheel of his cart which has become stuck in the rotting planks of the bridge. Below the bridge is a dry river bed covered in nettles and strewn with human remains, and worse still, he can hear the sounds of a horse approaching. He quickly hides under the tarp, hoping to escape detection. The horseman stops and seems to be aware that someone is hiding in the cart and calls out that he means no harm. After some reflection, Yurga decides to chance it and surfaces.

The horseman turns out to be a witcher; not just any witcher, but Geralt of Rivia himself. The two men discuss the merchant's predicament. Geralt remarks that the wagon is too big for the two of them to pull it free and asks if Yurga was traveling alone. The merchant admits that he did have two traveling companions, his servants Profit and Vell, who took flight leaving him to his own devices. Geralt then suggests simply abandoning the cart and getting to safety before whatever was responsible for the other bodies decides to make a feast of them, but Yurga won't hear of it. That cart is worth a year's income (at least) to him and he's not about to leave it. Geralt shrugs this off and makes to leave when Yurga begs him to help, saying that he'll give him whatever he desires.

Those are the magic words, the invoking of the Law of Surprise. Things settled, Geralt then suggests that Yurga get back in his cart and stay there quietly. He then prepares for the battle to come, and come it does. While Geralt does prevail, he is left gravely wounded and collapses after the fight. Yurga's servants return and help the merchant load the witcher onto the cart. Yurga, it turns out, is a good man and he undertakes to get the witcher to a healer. The rest of the story takes place as Geralt drifts in and out of consciousness on the road back to Yurga's house in Sodden.

He dreams of Yennefer and their last meeting during the Belleteyn holiday.

They cross the Trava and Geralt regains consciousness long enough for Yurga to explain that they are now out of Temeria and into Sodden. The witcher asks the merchant to hand him one of his potions, which he takes and slips back into unconsciousness. He dreams of the first time he returned to Cintra to claim Ciri, his surprise child from Duny and Pavetta. At first, Geralt does not know the gender of the child and assumes it is a boy. He asks Mousesack which of the gang of playing children is the one, but the druid tells him that Calanthe has forbidden him from telling the witcher. She doesn't want to give Ciri to the witchers and is making things as difficult as possible. The druid also reveals that Calanthe had hired him after the child was born to kill the witcher. At the last moment, she cancelled the plan without any explanation, but Mousesack admits that he would have done her bidding, or at least tried.

Geralt and Calanthe meet and have a protracted discussion about the Law of Surprise and whether or not she will give up the child, but in the end, the witcher explains that he doesn't believe in destiny. It's not enough, there must be something more. He tells the queen that he has no intention of taking Pavetta and Duny's son (as he still doesn't know that they had a daughter). They also discuss witchers and the trials as well as how Geralt himself became a witcher. Here we are told that Mousesack's assertions that Geralt was a surprise child are just stories, that Geralt was abandoned to the witchers by his mother, a sorceress.

The next scene opens as Geralt wakes up to find himself being treated by a sorceress and healer, Visenna. Up until this point, he had always wondered if he would ever cross paths with the woman who gave him up to the witchers. He had thought about her from time to time over the years. He had even entertained the notion of having her look into his mutated eyes and perhaps deriving some twisted pleasure from her reaction should they ever meet. But now that the meeting has happened, he finds that he derives no such pleasure and while he wants to speak with her, he's too tired and weak. He asks her to stay, but she refuses, and the next day she is gone.

The journey continues, and while a good deal better, the witcher is still not out of the woods health-wise. Geralt continues to spend much of the trip resting. When they finally arrive in Sodden, Yurga proceeds to explain that it more than just unlikely that the witcher will find what he asked for as a reward when they ultimately get there. He and his wife are well past their child-bearing years, so a new family addition is far from likely. They do, however, have two strong, bright sons and the having one of them train to be a witcher would not be so bad. Geralt insists that for all the medical care and transportation that the merchant has provided, they are now even and that no further reward is required, but again Yurga proves obstinate and insists.

Just as the river Yaruga comes into view, Geralt slips into one final dream, about the same crossing. In the dream, the witcher sees what looks like pandemonium on the banks. The crossing is the scene of quite a commotion as soldiers retreating from the Nilfgaardian assault are preventing peasants who are also trying to flee from crossing the river. The soldiers are intent on getting themselves across and then preventing the Nilfgaardians from following. They tell the peasants to get out their axes and build a raft if they want to cross, the ferry is the army's.

Amidst the furor, Geralt spies Dandelion who has apparently been abandoned along with a cartful of chickens and geese in cages. Geralt calls the bard over and helps him onto his horse and the two catch up on news, but the news is particularly bad. It seems that Cintra, the witcher's original destination on this trip, has been completely overrun by the enemy army and sacked. Worse still, it appears that the entire royal family was either massacred or chose to kill themselves rather than surrender. Calanthe is dead, and most likely Ciri. Since its appears that there is no longer any point to trying to reach Cintra, Geralt decides to join Dandelion and try to find a new crossing.

As they finally near the merchant's home, his wife, Goldencheeks, comes running out to meet him, clearly thrilled that he has returned safe and sound. She does have a concern though. While he was away, she took in an extra child, a girl who had been orphaned. Surprise! And now she's worried that Yurga will be angry at having another mouth to feed. It does not take long for the children to come back and among them is a certain ash blonde haired girl with green eyes, Ciri.

This story was loosely adapted as "Ciri", the final episode of The Hexer television series.

Expansion required
This article is too short to provide more than rudimentary information about the subject. You can help Witcher Wiki by expanding it.
Retrieved from "https://witcher.gamepedia.com/Something_More?oldid=420480"
Categories: