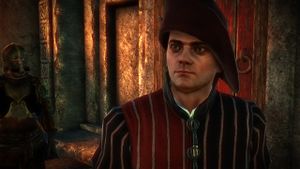 Silgrat is a secondary character in The Witcher 2: Assassins of Kings. He is the younger brother of Seltkirk, the hero of the previous war with Kaedwen. Everyone in Vergen had heard of Seltkirk, but his brother was not nearly as famous. Living in the shadow of his great brother, Silgrat became embittered, hungry for acclaim. He thought defeating a witcher in a fistfight would bring him glory. Geralt picked up the gauntlet after winning several fistfights at The Cauldron in Vergen.