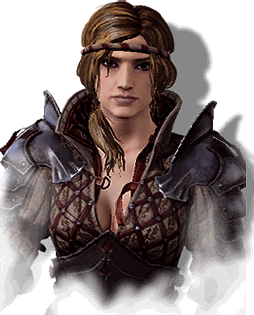 Saskia the Dragonslayer, the Virgin of Aedirn is a leader of the revolt in Upper Aedirn, opposing King Henselt's attempt to invade the disputed region. She is a rival of Prince Stennis, heir to recently deceased King Demavend.

If Geralt takes Iorveth's path, Saskia is poisoned with Thaumador or "magepain" during a meeting of the War Council and the witcher must help find ingredients for an antidote.

Nothing drives a revolt forward like the right leader, especially one who is a young girl known for performing miraculous feats of valor on the battlefield. From Joan of the Arc Coast to the infamous Falka, history is full of women who led fanatically devoted hosts to victory. Interestingly, all those heroines were not only charismatic, but also extremely beautiful. Saskia, whom men would follow into fire, was no exception. She was a smooth-skinned lass with blonde hair, dark brows, large eyes and shapely lips. Her full breasts perfectly complemented her rounded hips. In other words, she was the ideal icon for a rebellion.

News had already reached us of the heroic Saskia, the woman who held Kaedwen's armies at bay. At the time, however, it all seemed like little more than exaggerated rumors.

As with any true hero, there were many incredible tales about Saskia. Some claimed she was invulnerable to fire and had thus survived that terrible battle when Sabrina had rained the very flames of hell down upon the combatants. The girl was also famous for killing a dragon. One would be hard-pressed to find better material for a local hero.

If Geralt chooses Roche's path during the end of chapter I:

Once victory was out of reach and defeat inevitable, Saskia fled to Loc Muinne with Philippa Eilhart's help.

If Geralt chooses Iorveth's path during the end of chapter I:

Word of Saskia's deeds had traveled far beyond Aedirn's borders. She was a heroine in the eyes of many. What surprised me most was that she had made an impression on Iorveth, who had high hopes for her.

Even Iorveth grew doe-eyed when he gazed at her. This was especially puzzling because Scoia'tael are generally unmoved by human women, even those who are thought to be extremely beautiful.

Once Geralt discovered the whole truth about Saskia, all the pieces of the puzzle fell into place. Saskia, a high-bred dragon, could assume any form she desired – even that of a human.

Saskia had achieved a great victory, adding another chapter to her legend. There was, however, something baffling about the speed with which she set off for Loc Muinne, where she hoped to convince the rest of the North to recognize the Pontar Valley as an independent state.

Saskia was no longer her own mistress. He – or she – who could command the dragon, stood to attain great power indeed.

All were surprised when Saskia appeared. The dragoness quickly demonstrated herself to be a lethal tool controlled by someone else.

The following entry applies according to Geralt's decisions during the quest "The Spellbreaker":

Thanks to the magical dagger, the spell was lifted and Saskia regained her free will.

If Geralt chooses to kill Saesenthessis during the quest "Enter the Dragon":

The dragoness died by Geralt's hand – this time the stakes were too high to follow the rules of the witchers' code.

If Geralt chooses not to kill Saesenthessis during the quest "Enter the Dragon":

Though it was risky, the witcher acted according to his own beliefs. The spell still held the dragoness, but Geralt chose not to kill her.