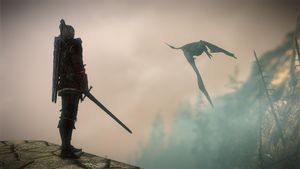 Saesenthessis is a dragon in The Witcher 2: Assassins of Kings.

First encountered during the Prologue, this dragon can be later seen in Chapter II (depending on choices made) and acts as a boss in Chapter III.

If you take Roche's path, you probably won't find out much about this dragon. It appears in the Prologue where it fights against king Foltest and his men during the siege of La Valette castle. Geralt states this is highly unusual behaviour for a dragon and suggests that it's lair was probably located nearby and that it must have felt endangered by the battle. According to Vernon Roche "The ploughing dragon nearly altered the result of the battle." In the end Geralt injures it, leaving his silver sword in its palate, and the dragon leaves in the general direction of Aedirn.

During the deliberations in the Chapter III sorceress Síle de Tansarville summons it to her defence and Geralt has to fight it. Síle later states that the dragon is controlled by Philippa Eilhart, another sorceress. The boss fight ends with Geralt flying on the dragon's back and the dragon impaling itself on a broken tree. You can either choose to kill it or to leave it be.

A lot of information is revealed about Saesenthessis on Iorveth's path. During the Prologue, there is one note you should pay particular attention to: the Crinfrid Reavers mentioning their encounter with the dragon on a scouting patrol, witnessing Scoia'tael bowing in honor before it.

In Chapter I, listen to the hints regarding Iorveth's motivations. His 'higher goal' will be explained in the next chapter.

In Chapter II, you discover that this dragon is actually Saskia, the Virgin of Aedirn, as she changes her shape in order to protect Geralt from certain death at the hands of Dethmold. She reveals she is actually daughter of the golden dragon Villentretenmerth. Her motivation to unite all the people of Aedirn is explained and it is also stated she's been long preparing the revolt with Iorveth who also invented the Dragonslayer story. Only too late do you discover that, as Philippa Eilhart was curing Saskia from poison, she also gained control over her using a Rose of remembrance. Philippa means to use her as her safety guard during the deliberations in Loc Muinne and Geralt and Iorveth pursue them there.

In Chapter III, you can find a counterspell to free Saskia from Philippa's influence. However it can only be accomplished after the boss fight.