From Witcher Wiki
(Redirected from Sabrina)
Jump to: navigation, search

Sabrina Glevissig is a sorceress from Kaedwen, and one of king Henselt's advisors. A descendent of Jade Glevissig, she is also a member of the Lodge of Sorceresses. She often wears provocative outfits to underline her beauty.

She and Yennefer seem to be rivals of a sort. They both feign friendship with each other and claim to be the younger of the pair, taking offence to being called former classmates.

Sabrina appears in this premium module for The Witcher, originally released without voices in April, then re-released as part of the Enhanced Edition in a fully voiced version in September 2008.

Based in the surroundings of the Kaer Morhen stronghold, 'The Price of Neutrality' finds Geralt coming back to the witchers base of operations for the winter. Coming across a small camp near the stronghold, Geralt meets a nobleman and Sabrina Glevissig, who are trying to find a young woman staying in the stronghold.

Born under the Black Sun and prophesied to ruin the world, Deidre is Eskel's surprise child and the sister of the nobleman who wants to make sure she will not have the crown. Sabrina wants to kill her as well to examine her body and discover the truth about the Black Sun — being The Witcher, Geralt has to choose who he sides with.

Sabrina stays in her very luxuriously appointed tent in the camp across the ford from the keep. She uses a particularly impressive illusion to bring her interior décor up to her standards. This décor also includes a "boy", actually a young man, presumably conjured to help her while away the lonelier times as she waits for Deidre to be delivered to her. She also dabbles in sales.

and she will buy wolf pelts, basilisk hides, books and most potion ingredients.

Sabrina can reliably be found enjoying the comforts of her tent at the Camp. While splendid on the exterior, even for a tent, this is nothing in comparison to the interior which is helped along décor-wise by an elaborate illusion, complete with (innocent?) young male companion.

Sabrina Glevissig is one of the most powerful and influential sorceresses in the Northern Kingdoms. She lives in Ard Carraigh, Kaedwen's capital, acting as an advisor to King Henselt. The sorceress, who is sometimes unceremonious and quick to judge, is justly called the "true daughter of the Kaedwenian wilderness." She often underlines her somewhat predatory and vivid beauty by donning provocative outfits.

Sabrina arrived at Kaer Morhen while pursuing Deidre Ademeyn. She suspects the girl of being a mutant affected by the Curse of the Black Sun, which renders her a monster, a serious threat to the human race. To prove this contention, the sorceress must capture Deidre and subject her to detailed testing.

Inconsistencies with the books[edit | edit source]

"The Price of Neutrality" takes place before the Witcher saga, even though in the books Geralt first met Sabrina on the Thanedd Island, in Time of Contempt. 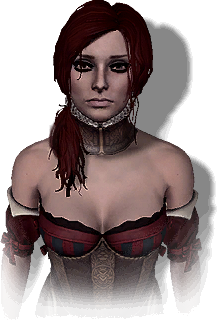 Sabrina Glevissig is a secondary character in The Witcher 2: Assassins of Kings.

The sorceress Sabrina Glevissig was from Ard Carraigh, the capital of Kaedwen, and had been King Henselt's advisor. The reader, however, should not be deceived by that term – this true daughter of the Kaedweni wilderness was famous for her determination and temperament. There was no exaggeration to the rumors that on many occasions she would interrupt the King, thumping her fist on the table and yelling that he should shut up and listen - and the King would indeed shut up and listen. Sabrina Glevissig's predatory nature was paired with an equally predatory beauty, which she emphasized through appropriately chosen attire. Add to that the power she commanded as a sorceress, and it should become clear to what she owed her strong position not only in Kaedwen, but also beyond its borders.

This position could not protect her from the king's wrath, however, and when she failed Henselt one time too many, the sorceress ended up at the stake, where her life ended.

If Geralt chooses Roche's path during the end of chapter I:

Sabrina cast a curse on the monarch and the battlefield with her dying breath. Many years later we were to feel the effects of this malediction.

Sabrina had become a martyr in the eyes of some soldiers, thus possibly achieving greater esteem in death than she had enjoyed in life.

It cost Geralt a great deal of sweat, but he finally found a solution to the problem. Sabrina's spirit finally found solace, and the curse she had placed on Henselt was lifted.

There is a gwent card with her name. It is part of Geralt's initial base deck for Northern Kingdoms.