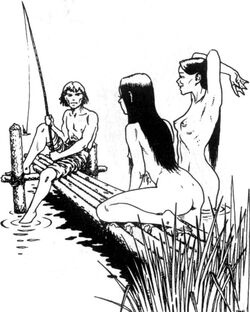 Rusalki are river-dwelling cousins of dryads. They are sometimes called vilas although the latter are more closely associated with hills and forests. They have long, usually light-colored hair which they adorn with wreaths of flowers. They often wear sheer, flowing robes but they can also appear completely nude. Though usually silent, they are able to sing beautifully. They come out of the water at night to dance in moonlight.

They are said to lure men with their beautiful songs and then drown them. Other tales tell of them dancing men to the point of exhaustion and death.

In the short story "A Grain of Truth" Geralt initially believes Vereena is a rusalka. Upon finally meeting her, he comments:

Expansion required
This article is too short to provide more than rudimentary information about the subject. You can help Witcher Wiki by expanding it.
Retrieved from "https://witcher.gamepedia.com/Rusalka?oldid=426273"
Categories: