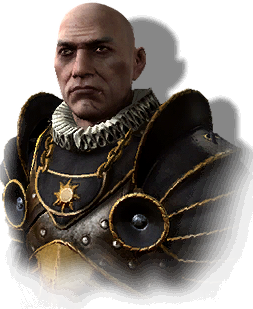 Renuald aep Matsen is a secondary character in The Witcher 2: Assassins of Kings. He was previously a member of the Impera brigade, serving as imperial protection for ambassador Shilard Fitz-Oesterlen in Loc Muinne. He is first seen with Shilard Fitz-Oesterlen during the decompression of Triss on Iorveth's path, restraining Assire var Anahid when Shilard murders her. On Roche's path, he can be seen training his soldiers near Loc Muinne's market square. He is encountered in Chapter III if Geralt chooses to rescue Triss instead of Anais La Valette or Philippa.

Just as ambassador Shilard Fitz-Oesterlen was the Imperator's mouth here in the North, Renuald aep Matsen was his iron-clad fist. One look at this stern warrior's face was enough to instill a justified respect. He and his ilk became symbols of Nilfgaardian power when black standards and cloaks fluttered together with the tramp of the cavalry's hooves and the clash of arms in battle. The veterans from the Impera brigade were famed for their fanatical loyalty to the Imperator, and Matsen was no exception in that regard. He carried out his ruler's every order without question.

If Geralt chooses to rescue Triss during Chapter III:

Guided by loyalty to the same power, Renuald followed the orders he had received and sent Shilard to the beyond without blinking an eye.
Yet the witcher made sure that Matsen embarked upon the same journey not long after the ambassador.