After the deaths of the seven gnomes, Renfri, better known as Shrike by then, gathered a new band of cutthroats. When they reached Blaviken, they had a letter of safe conduct from king Audoen.

The band was dismembered (quite literally) after they stood in Geralt's way in Blaviken, as described in the short story The Lesser Evil.

In addition to Renfri, the band consisted of six men.

Renfri and her band also appear in the graphic novel "Mniejsze zło" (The Lesser Evil). 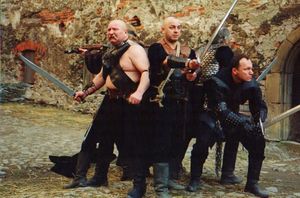 Renfri's band in The Hexer

Renfri and her band were the ones to set fire to the temple of Melitele in Ellander.