The fighting between the Order and the Scoia'tael in the streets of Old Vizima has taken its toll and former residents are now refugees, seeking shelter anywhere. Their daily battles in the streets have driven many Vizimans into the swamp cemetery. At least there they need only fear the drowned dead, drowners and bloedzuigers.

Scattered about the swamp are a number of caves. Some caves lead to ancient and abandoned crypts, others to long forgotten industrial concerns. Three of the caves have now become known as Refugee caves, for obvious reasons:

Sewants can be found in all three caves. 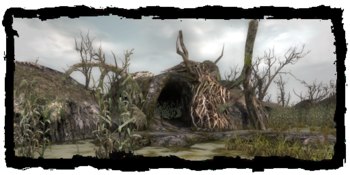 The Druids' cave tends to be the first cave Geralt finds in the swamp cemetery. Just west and north of Cemetery Island, it is where he must lead either Shani or Zoltan, depending on the path he has chosen. It is also where Cousin Corbin is hiding along with some Druids preparing for The Green March. 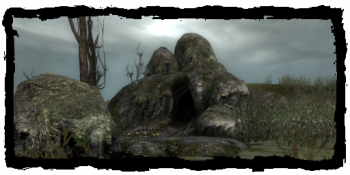 The second (for lack of a better designation) cave entrance can be found near the entrance to the cemetery, just east of Cemetery Island. Basically, there is nothing there except one of Antoinette's cousins, Buse. There may be some loot in a barrel, but otherwise, this cave is a big disappointment. 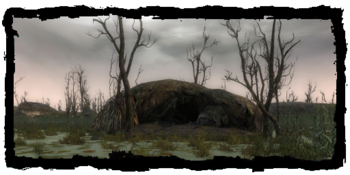 This is the most southerly of the three refugee caves, and so tends to be the last of the Refugee caves that Geralt finds. It is south and to the ever-so-slightly west of Cemetery Island and has two chambers. One is where Zdenek, the most famous fist fighter in history resides. Hidden in the recesses of this chamber lies one of the Ancient crypts: Agnes of Glanville's lair. The other chamber is where Cousin Ramerot and another refugee are holed up.